How I sold 1,000 books over the holidays #marketing #bestseller

Here is my promised share of how I sold 1000 books and became a bestseller (in Canada and Australia, at any rate) over the 10 days of the Christmas/New Year holiday. Settle in, folks, this is going to be a long post.

First up, what I did was nothing ground breaking, just plain old advertising and spreading the word.

For a bit of background, the book I promoted was THE PRINCE’S MAN, first in my Epic Fantasy series (only 2 books out so far, 3rd one is underway). 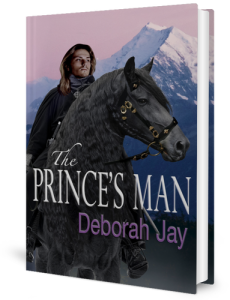 I know it can sell in quantity – when it came out, it was an Amazon Top 100 Hot New Release, selling 1500 copies in the first 6 weeks. That was back in 2013. I’ve written and released several other books since then, including its sequel, THE PRINCE’S SON.

I haven’t promoted TPM in over 12 months, and sales had dwindled to just the odd copy each month. I haven’t put much effort into marketing anything this year, for personal reasons, and I simply made the decision one night in November to have a crack at a holiday promo, so I sat down with my list of marketing sites and set to it. All the sites I used, I’ve used before, some with more success than others, and this time I will be able to refine that even further on the grounds of ROI (return on investment) – details coming further down this post.

I set up a 99c/99p sale, to run from Christmas Day to January 4th, hoping to capture all those people with new ereaders, and all the established readers with time on their hands over the holidays, and I guess it worked!

I fretted at first, having spent what I considered to be quite a lot of money on adverts – around $200.

Then came the big one.

I’ve been applying for a BookBub advert on and off for about 3 years, but never yet succeeded. If you aren’t familiar with BookBub, let me tell you, getting an ad with them is about as hard as getting an agent to read your book (I’ve had 2 agents, so perhaps its harder!). Particularly since Traditional publishers have jumped on the bandwagon and are now hogging many of the ad spots, making it even harder for indies to get one.

Bookbub also make it impossible to know why you didn’t get a spot – they insist your cover must be professional (agreed) and your book must be well edited and free from typos (also agreed). They don’t have a minimum number of reviews, but they do scrutinise them to check for negative comments. They do say that competition for spots is hot (I can believe that), and often a book will be turned down simply because it isn’t the best fit for their list that time around.

What they won’t do, is give any feedback on what you might change to improve your chances.

I believe in my book, my cover, and I have great reviews (thanks to all my awesome readers), so I just kept on applying every so often in the hope that at some point I might be lucky.

Don’t get me wrong – their prices are SCARY!  But reported sale figures are sky high – for example, for a 99c fantasy book, an ad costs $614 , but average sales on that one ad are around the 2000 mark, with many reporting as high as 3000.

[To give your fantasy book away for free, an ad costs $307 !!! But average number of downloads is in the region of 40,000 – if you are giving away a first in series as a loss leader, that makes it well worth it.]

So when an email arrived from BookBub, I nearly had a melt down!

What I read put me somewhat off balance – they were offering me an International ad, which means it will appear in all countries – except for the US.

That did reduce the cost (to $174), so I jumped onto a couple of author Facebook pages I belong to, and asked for advice. It was mixed – lots of encouragement, but also a couple of authors who’d taken this type of ad with “less than stellar results”.

In the end, I decided to give it a go. At least the offer means they are willing to take my book on, and the email also invites me to apply for a US ad after 30 days, so I had no desire to prejudice them against me by refusing the International.

Right, pre-amble over, here is what I did:

Current advice is to stack your ads for a slow increase in sales, rather than a big, sudden peak which might trigger alarm bells for the Amazon watchdog algorithm. As you can’t pick your precise day for BookBub in advance, it wasn’t totally ideal, coming in the middle of my other ads, but at least it wasn’t at the start.

(BTW if you are having a FREE promo, it’s apparently fine to have a big spike in downloads immediately).

(I put most of Boxing Day’s sales down to Book Barbarian, as that’s the sort of figure I’ve had from them before, although a few might belong to the other sites)

I shared on my blog, on THE WRITE STUFF, and to my newsletter and my Goodreads fans. I also advertised on the following free sites, though I can’t confirm whether/how many sales should be attributed to any of these.

These first two were actually active on the 24th (because of the holiday, prices needed to be lowered earlier than usual) and I had 2 sales that day – whether from both sites or only one, I can’t tell.

I had a further 15 sales on Apple, 17 sales on Kobo and 29 on Amazon that I cannot directly place with any specific ads (they came on January 2/3), PLUS, and now comes the truly awesome part, readers went directly on and have bought so far 125 copies of THE PRINCE’S SON at full price ($4.99), the first 4 sold on the 26th!

AND its now mid January and I’m STILL seeing sales averaging 10 copies a day, even though THE PRINCE’S MAN has gone back to full price!

Here is one of the most exciting things that happened during this sale: 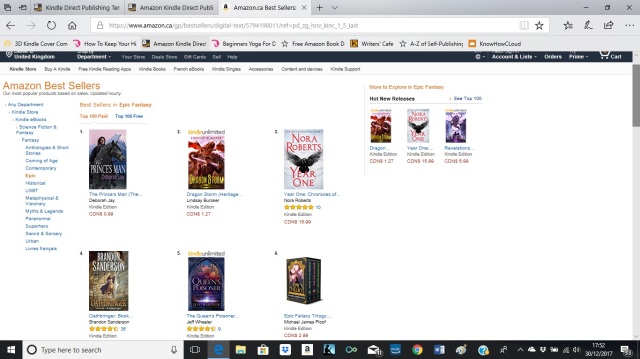 In fact, it made it to #1 (Canada) in both Epic Fantasy and ‘Sword and Sorcery’ (another hotly contested category), AND #24 paid overall! 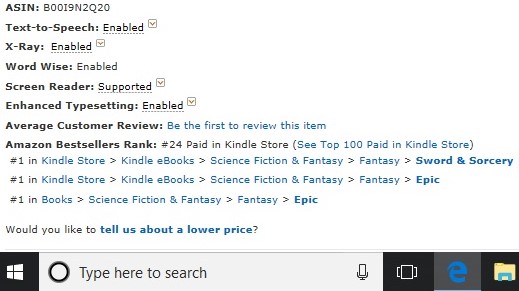 The story was similar in Australia: 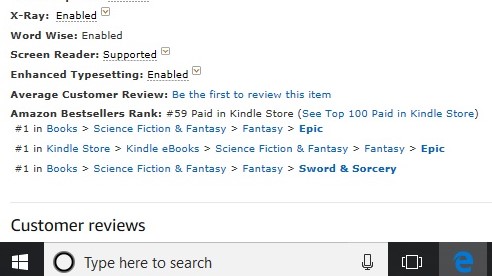 (I do have the original screenshots, showing these stats do, indeed, belong to my book, just in case you’re wondering).

And in the UK, TPM made it to #2 in both categories as well, all of this courtesy of that BookBub International advert.

Return on investment is nigh on impossible to calculate with any accuracy, especially during a promo like this – you have no idea which site purchasers clicked through from, so it’s all a bit of guess work.

If we take a rough calculation that, at 99c, and Amazon’s 35% royalty, 3 sales = $1 income, then we can calculate roughly how many sales are needed to pay for an advert.  This doesn’t take into account any sales of further books in the series, but its a starting point.

Looking at straightforward ROI for the ads I used, the only one that actually earned back and produced a profit was the BookBub ad. Book Barbarian and Book Gorilla both came close.

Of course it isn’t that simple, because the up sell to other books isn’t possible to calculate on an individual ad basis, or the financial benefit of increased visibility resulting from higher ranking.

What I CAN take from this is that certain sites were less effective than others, and I will trim them from my next round of ads. This time around, Choosy Bookworm disappointed, as did Book Lovers Heaven and Booktastic. Fussy Librarian didn’t show too well either.

Of the rest, I will include them another time around and review again.

Do remember that some of the sites I used are genre specific for fantasy (such as Book Barbarian – a SFF only site). There are other sites that do well with different genres I have tried, but found them not to be effective for fantasy.

I DO normally use  http://ereadernewstoday.com/bargain-kindle-books/ and find them to be the other big-hitter in ROI, but they were full this time around.

You can find several downloadable lists of promo sites on my resources page (scroll to the bottom), and I’m in the process of putting my own together, the only issue being it needs frequent updating as sites come and go, and change their requirements, which eats time.

So the take home from this for me, is to once again highlight the persistence you need to be a successful indie – if you have previously applied, more than once, for a BookBub ad, don’t give up. I think this was my fifth attempt, although I know authors who have tried many more times than that, but if I’d given up sooner, I would never have discovered that yes, they did approve my cover, my quality of writing, and my reviews. Now I have the confidence to apply again, and hopefully get a US ad next time, although I certainly won’t turn down an International, though I wouldn’t do that for a while.

If you haven’t tried, don’t be put off by the huge price tag – it’s worth it!

I can’t say I made a huge profit in the short term – something in the region of $325 (£240). But I count any profit to be a successful promo, and the benefits are continuing afterward, in the ongoing sales and raised sales rank making for increased visibility.

The final bonus from this, is that BookBub also write their own original advertising copy for your book (I guess someone reads it? Or at least skim reads it, because some of this info isn’t in my original blurb), and I love it!

What do ya’ll think:

Rustam, a rakish royal spy, joins a beautiful assassin on a mission of espionage — only to make a startling discovery about who he really is… Magic, intrigue, and romance collide in this captivating fantasy adventure!

Any questions about the promo? Please ask away…

← DO you know what writers are entitled to claim as expenses? It’s THAT time of year again – #accounts, #TaxReturns
Everything You Need To Know About Blogging →