I previously reviewed another of Ian Martyn’s SF novels, PROJECT NOAH, and enjoyed it, so when he asked me if I would review this novelette, I was more than happy to squeeze it into my schedule.

It’s a prequel for a full length novel, and sets the scene very competently, while being a complete story in its own right. Here’s the blurb for the full length book:

Bleak – The story of a shapeshifter 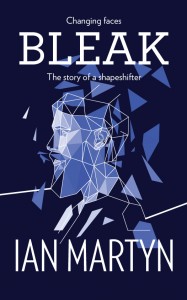 In putting put down the rebellion the Confederation used the ultimate spies.  Creating, against all conventions on the use of human clones, manipulents, shapeshifters.  However, in peace time their existence is a career ending embarrassment for many.   So now they must be eliminated.  After months on the run, one of their creations, Bleak, is cornered in the Grand East Ground Hub of Metrakis’s main space port.  Until that is, a desperate Catrinas Pekrov of the Confederation intelligence Unit decides she might have a use for his particular talents after all.’

Bleak’s circumstances and programing give him little choice, involving him in a plot that will threaten the stability and future of the newly united Confederation.’

Amazon link: Bleak – The story of a shapeshifter.

Smashwords link: Bleak – The story of a shapeshifter

And here is my review of the prequel:

Bleak: The First Mission by Ian Martyn
My rating: 4 of 5 stars

‘Bleak’ is the name of the central character, not the outlook of this 10,000 word novelette, a prequel to the ‘Bleak’ series. Having said that, Bleak’s potential for having a future is less than stellar.

As a modified clone – and here’s the twist on SF/fantasy – Bleak is a shape shifter, with a scientific rationale behind his ability. His transformation isn’t instant – I loved the fact that he had to eat tons to gain the extra height and weight of one of his assumed personas – and it isn’t approved of by society. Bleak’s very existence is, in fact, an embarrassment to the military, which uses his talents to infiltrate key targets.

This novelette details Bleak’s first mission, before the war is won, and before he discovers that being an embarrassment can quickly become a fatal condition. The story held no real surprises, but it was well written and easy to follow, and I will be interested to see where the series takes us now that Bleak is a hunted fugitive.

In the case of both PROJECT NOAH, and BLEAK, I actually want to give 4 1/2 stars, but no one will let me! It was only the lack of surprises that kept my rating down that bit, and in neither case did that detract from a great read.