I am happy to report that my creativity has returned following its 2019 enforced sojourn. I am currently writing the next in my Caledonian Sprite contemporary fantasy series, so I will be back to producing more writing-related posts soon. In the meantime, I still have a whole load to catch up on from my October visit to Orkney.

The Orkney islands are oozing with history that spans a vast range of time. Some of my favourite sites were from the Neolithic period – beginning some 10,000 years BC (the final part of the stone age) – and Orkney has plenty. In fact, they are still uncovering a new find near to Maeshowe, the subject of this post. 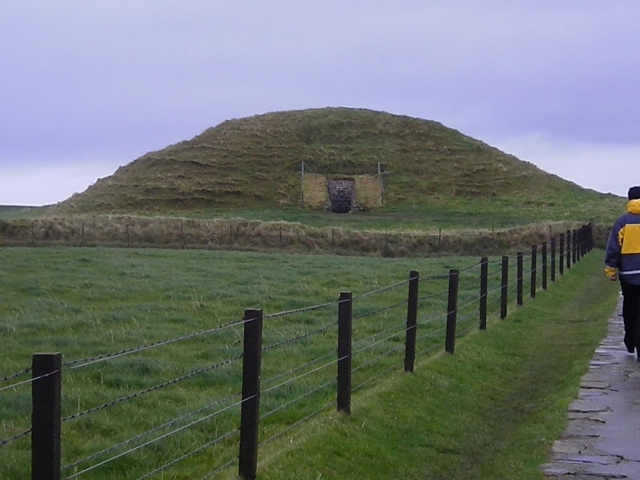 Maeshowe is a chambered cairn, or burial mound. At 35m wide and topping 7m tall, it’s a large structure, yet the 10m long entrance tunnel is only just over 1.2m high – quite a challenge when one is slightly claustrophobic!

A bit closer, you get a better understanding of the size:

Sadly photography is not permitted inside, but I can assure you it is an amazing feat of construction – the entrance tunnel which, remember, is 10m long, is formed on each side by massive single sandstone slabs, weighing around three tonnes each!

Quoting from visitscotland.com, “Maeshowe sits in one of the richest Neolithic landscapes in Europe. A place of stone circles, villages and burial monuments, where people lived, worshipped and honoured their dead. Alongside Maeshowe are other incredible survivals from that far-off age, including most notably the Stones of Stenness, the Ring of Brodgar and the village of Skara Brae.”

“Maeshowe is a masterpiece of Neolithic engineering. It is an exceptionally early architectural accomplishment. With its almost classical strength and simplicity it is a unique survival from 5000 years ago. It is an expression of genius within a group of people whose other tombs were claustrophobic chambers in smaller mounds.”

There is a close connection between all the Neolithic sites in the area, with clear alignment between several, and yet they are all very different. Maeshowe is accessible only as an organised tour with guide, but the others are freely available for the tourist to wander and photograph, so lots more to come on those. 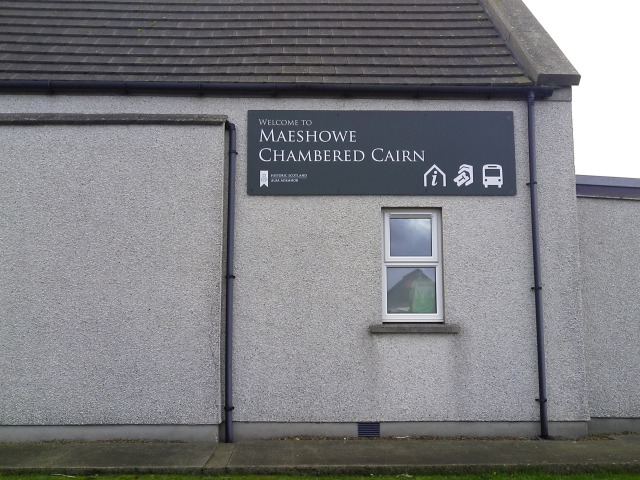 Back to the inside of Maeshowe! Once I’d made it through the tunnel (not quite as bad as I’d expected – you can walk in, though with bent knees and fully bent over with your back just clearing the tunnel roof, though I have no doubt someone taller might find it more challenging) the inside is quite roomy, just over 5m across, and the roof is lofty, so I felt able to breath, despite the weight of all that stone and turf above my head.

The sandstone blocks forming the walls are huge, and like other stone age monuments, there is continual speculation over how they were transported there and erected. Estimates of the time taken to build it range from 39,000 man hours, to 100,000! However long it took, it is a true feat of engineering.

There are 3 side chambers, presumably where the remains were stored. As photographs are mostly copyrighted I can’t produce them on here, but you can take a look at the best HERE!

In keeping with so many mysterious ancient constructions, Maeshowe is carefully aligned so that at sunset during the three weeks around Winter Solstice, the light of the setting sun shines straight down the passage and illuminates the back of the central chamber. The sun’s rays align with a standing stone, the Barnhouse Stone, standing 800m away.

For a really good, short informational video of Maeshowe, take a look at this one from Historic Environment Scotland. Again, copyright prevents me from reproducing it here.

Moving forward in history, we come to the 12th century,when Norsemen (Viking descendants) broke into the tomb and left their graffiti! These inscriptions represent the largest single collection of such runic carvings in the world – take a look HERE. The translations are rather bawdy, as befitting Viking raiders.

Amongst the carvings are a number of animal figures, most famous is the dragon, which has been adopted as a mascot for the Howe.

We were left with a feeling of awe at the survival of something so incredibly ancient, and yet across the next few days, we were even more amazed. See you next time…