Tanked up on caffeine after our ferry trip, we set off from St. Margaret’s Hope on South Ronaldsay, first stop, the truly awesome (in so many ways) ITALIAN CHAPEL, on the tiny island of Lamb Holm. Like so many of the Hebridean islands, there are causeways linking islands together, but these on Orkney came about for a very specific reason, involving Italian POWs.

As I mentioned in a previous post, until I began researching this trip, I’d had no idea at all about the significance of Orkney to the World Wars. Since discovering this, I can’t seem to stop falling over related information – just a few days ago, while reading the writing magazine, Mslexia, I came across an account by a writer who’d been inspired to set her novel on Orkney, after discovering that the very first casualty of WW2 was killed on the islands.

The huge significance of the causeways linking the islands is evident in their collective name: the Churchill Barriers, ordered to be built by then First Sea Lord Winston Churchill (later Prime Minister), to prevent German U-boats accessing Scapa Flow, (see map above), the huge, enclosed bay where the British fleet gathered prior to many expeditions. This was in response to the sinking of the Royal Oak, while moored inside Scapa Flow, with the tragic loss of 834 men.

Of course, to build such massive constructions at that time (early 1940s), required significant manpower, and to that end, 550 Italian prisoners of war, captured in North Africa, were brought to Orkney in 1942.

200 of these POWs were based at Camp 60 on Lamb Holm. In 1943, Camp 60’s new commandant, and Father Gioacchino Giacobazzi, the camp’s Catholic priest, agreed that a place of worship was required. Two Nissan huts, (prefabricated steel structures for military use, often used as barracks), were made available, and the men set to work, creating a facade out of concrete to conceal the shape of the huts.

Here’s a view where you can still see the basic construction and appreciate what a marvellous creation this was. 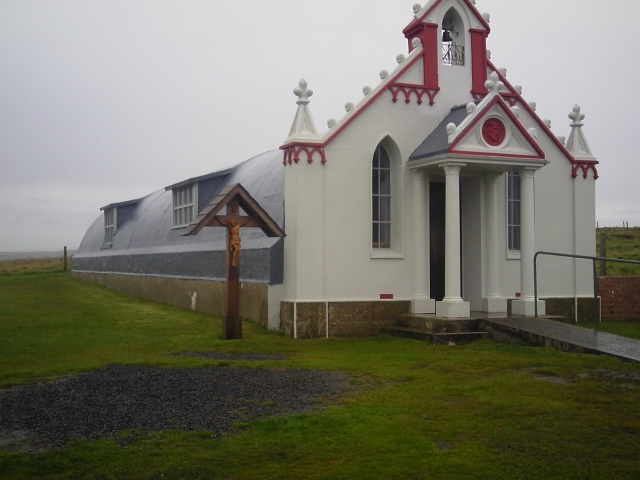 And yes, it was raining! A perfect excuse for going inside to see the incredible interior décor.


Among the Italians in Camp 60 was an artist, Domenico Chiocchetti, who carried with him a card given to him by his mother, with an image of the Madonna and Child by Nicolo Barabino, which he used as the basis of his painting above the altar.

He was assisted by a cement worker (the altar is made from cement left over from the barrier constructions) and a blacksmith. 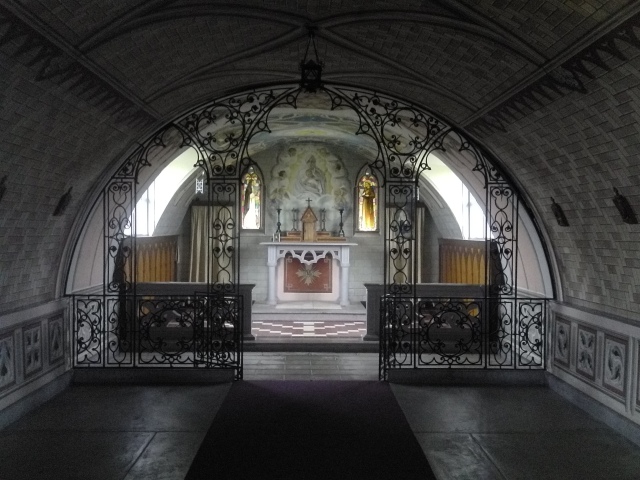 Once the camp commandant realised what a talented artist he had to hand, Chiocchetti was allowed to continue decorating the chapel. 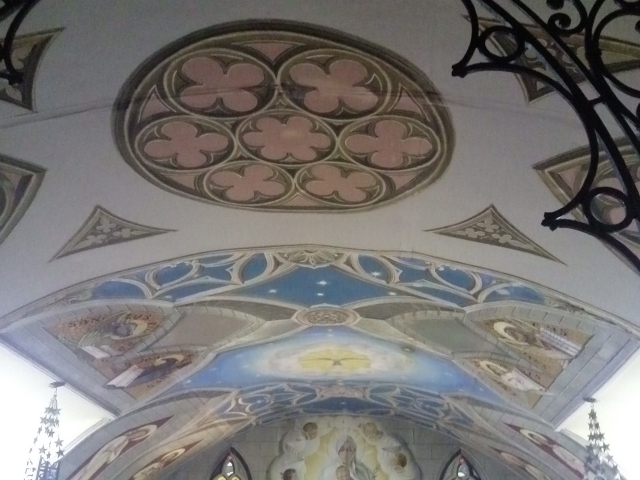 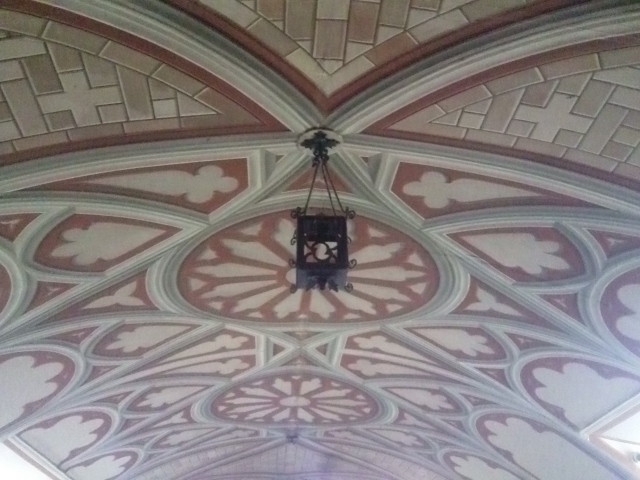 Working with limited resources, the lanterns were created from corned beef tins. 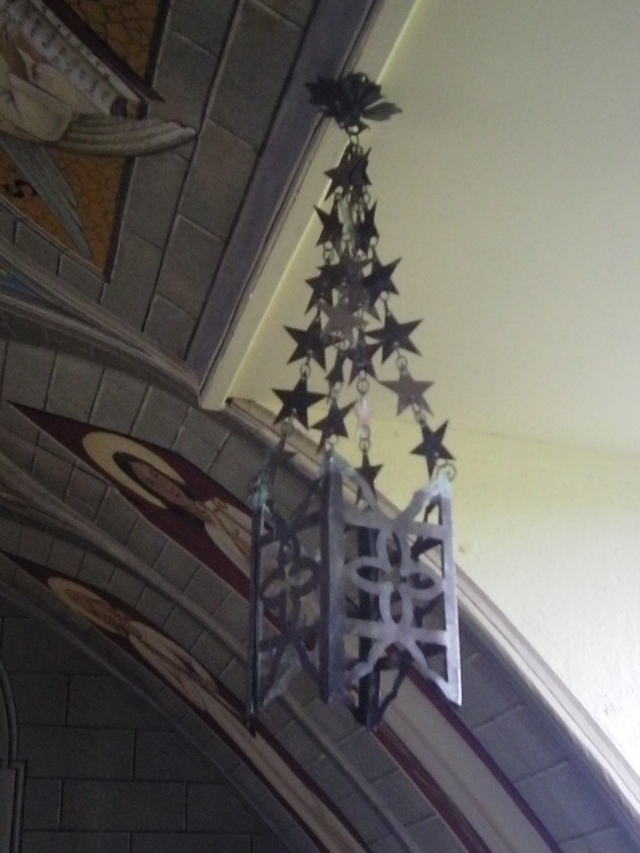 Isn’t that amazing? Keep on remembering the reality of the basic building and the lack of materials these POWs were working with – a testament to the creativity that man can still evince, even under extreme conditions. 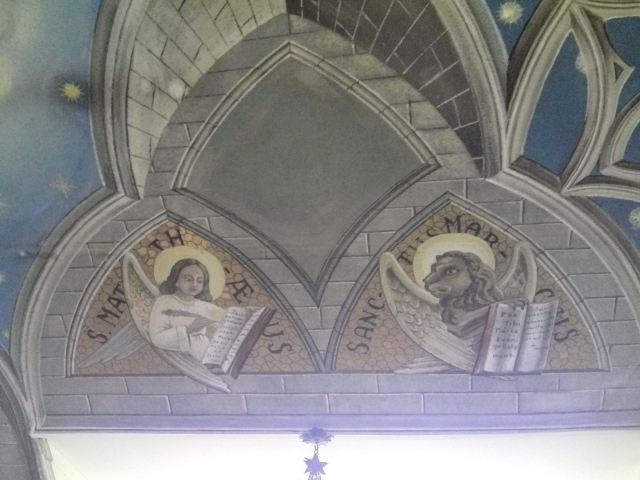 The baptismal font was made from the inside of a car exhaust covered in a layer of concrete. 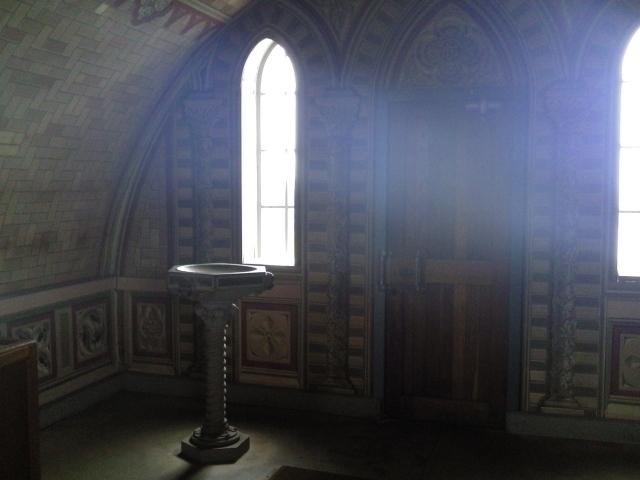 When his fellow prisoners were released shortly before the end of the war, Chiocchetti remained on the island to finish decorating the newly consecrated chapel.

1944, the artist on the left, blacksmith on the right.

Restoration work has been carried out on several occasions, including in the earlier days, by Chiocchetti himself, and later by Antonella Papa, a restoration artist from Rome, who had previously done work in the Sistine Chapel. This maintains the chapel in the beautiful, bright condition you see in my photos, but let me end with an exterior pan, to really put into perspective the bleak location of this wonderful piece of wartime artwork, starting with a view of one of the barriers.

Truly a marvel, wouldn’t you agree?

← Over the sea to #Orkney, #holiday
Customer service rants! →