#Wildlife trip – the Isle of May, to see Puffins! #Scotland #holiday

I’ve had a lovely break away on Orkney following mum’s funeral, and my head is a little clearer. I’m experiencing a very strange mixture of emotions, the most unexpected being startling sensations of freedom, and I’m starting to realise that when you are caring for someone long-term, you don’t realise how much continual, low-level stress you are under until it’s gone. While grief still strikes without warning, I am also starting to look forward towards my new life, and my final move to the Scottish Highlands is underway.

Writing has not yet resumed, there is too much to do, with clearing the old house and working out a structure for my new life, so for now I’m going to carry on sharing this year’s holidays, today covering a day trip we took during our short break in Edinburgh back in July.

I’ve always wanted to see puffins in the wild, and this is one of their major breeding grounds. Although we were too late in the year to see them nesting, there were still plenty around.

Quoting from Wikipedia, “The Isle of May is located in the north of the outer Firth of Forth, approximately 8 km (5.0 mi) off the coast of mainland Scotland. It is 1.8 kilometres (1.1 miles) long and less than half a kilometre wide. The island is owned and managed by Scottish Natural Heritage as a national nature reserve. There are now no permanent residents, but the island was the site of a St Adrian’s Priory during the Middle Ages.” 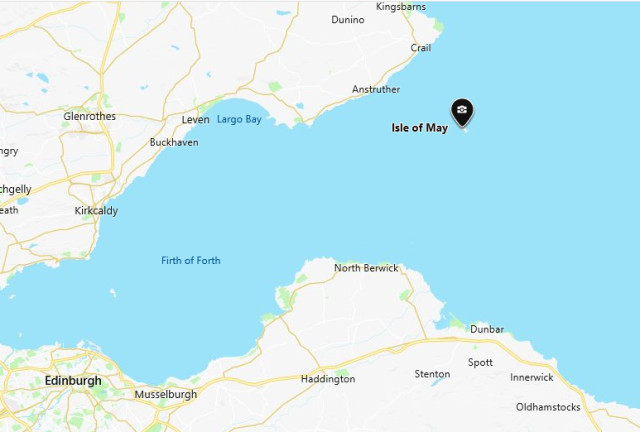 There are two ways to get there: the ferry from Anstruther, which we took along with around 100 other people, or the RIB (high speed inflatable), which takes only about a dozen people, from Edinburgh. The latter is far faster (half an hour, as opposed to an hour on the ferry), but I don’t do well on small boats! 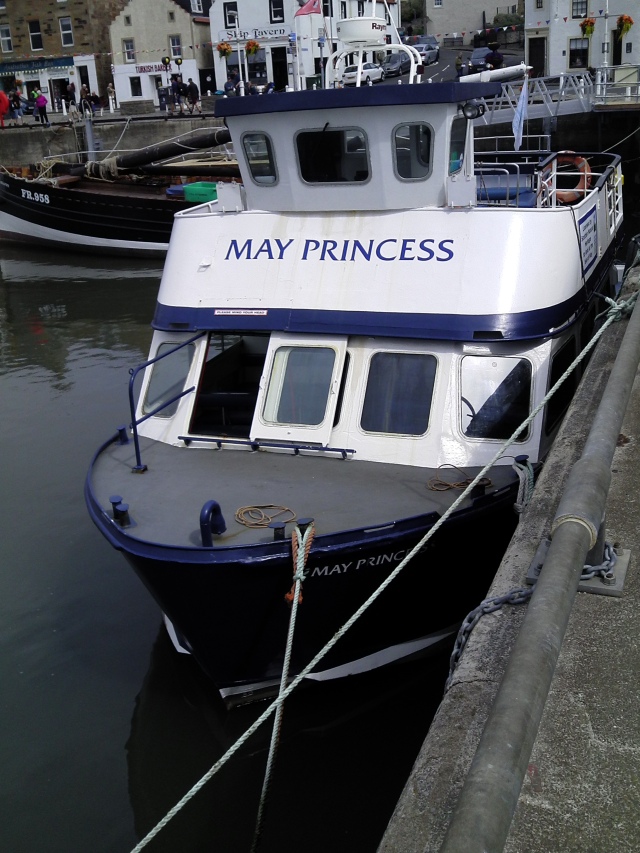 There’s no doubt we were well squashed in! 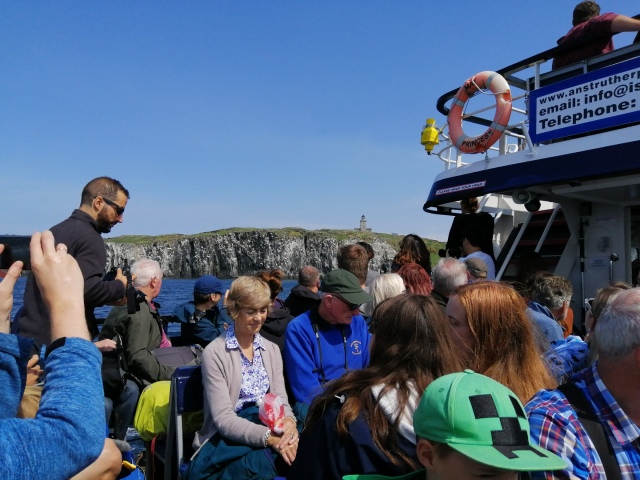 It was a lovely, hot day, and the water looked encouragingly calm inside the harbour.

I should have known better!

We chose seats right in the stern for a good, clear view. We didn’t take any notice of the gaps in the hull at around ankle level, but we were to learn more of these later.

As the journey reached around the half way mark, the sea was increasingly choppy, and I was grateful I’d taken anti-seasickness tablets. We began to notice little gatherings of sea birds in groups on the water, and suddenly realised we were seeing puffin creches!

Watching the young birds getting the hang of life at sea was endlessly amusing, as they aren’t the most elegant of birds, particularly the chicks. At this point in their lives, they are learning to fly, and while the adults skim just above the waves, the chicks often misjudge, clip the top of a wave, and bounce!

Approaching the harbour, the sea was really quite rough, and we had to sit off shore for a while, hoping the waves might die down long enough for us to sneak through the narrow entrance. It was here that we learned what those gaps in the hull were for, as water sloshed in, through, and out the other side! Keeping our feet lifted helped, although most of us had wet shoes by this point.

And then we dropped into a deep trough, and a huge wave broke over the stern, soaking us right down to our underwear!

Eventually, a chance was seized, and we dashed in through the gap in the rocks, disembarking to the squelching sounds of our sodden clothing. Thank goodness is was a warm day! Warnings were given about the short walk along the jetty – this was alongside prime tern breeding territory, and the pretty little birds were prone to dive-bombing visitors and attacking their hair!

We made it, thankfully unmolested, to the un-manned welcome centre. 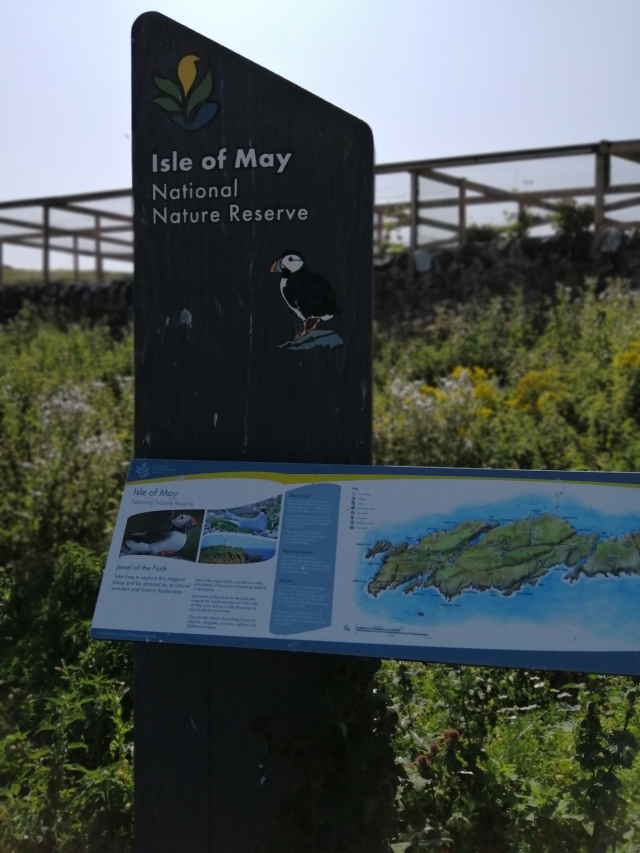 To see a landscape simply buzzing with various seabirds

See how well the chicks blend into the scenery: here’s a blown up snap from the video above – there’s one right in the middle of this pic: 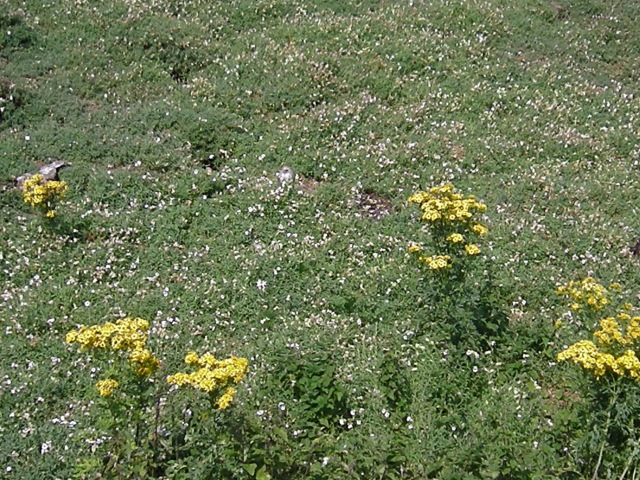 In addition to being a fantastic wildlife breeding site for many species, including puffins, guillemots, razorbills, shags, cormorants, terns and grey seals, the Isle of May has a rich history. It is the site of Scotland’s first lighthouse, with a coal-fired beacon established in 1635. More recently, in 1816, a proper lighthouse was built by Robert Stevenson. in ‘an ornate gothic tower on a castellated stone building designed to resemble a castle, 24 metres (79 ft) high and with accommodation for three light keepers and their families, along with additional space for visiting officials. The new lighthouse started operating on 1 September 1816, and is now a listed building.’ (Wikipedia)

It didn’t become fully automated until 1989. 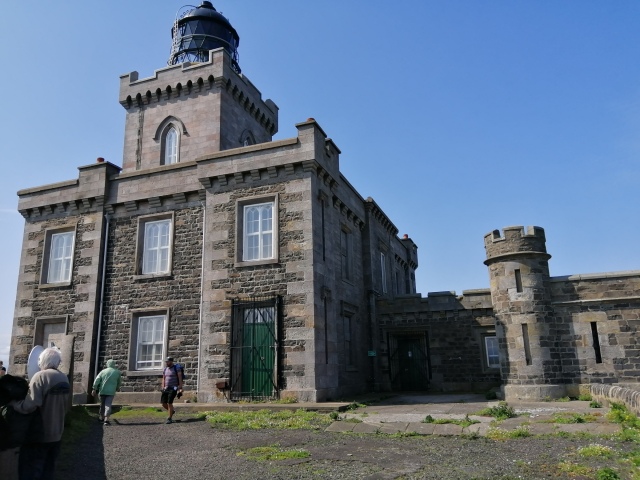 In the 17th and 18th century it was a hotbed for smuggling, and during the 1715 Jacobite rebellion, 300 soldiers were marooned there for 8 days.

During WW2 there was a garrison posted on the island, and much of their way of life is still visible in the living quarters left behind – pretty basic!

Back to the reason for the visit: puffins!

Did you know, puffins don’t nest like other birds, they lay their eggs in burrows!

Of course, they’d vacated these by the time we visited, but the land is pocked with hundreds and hundreds of their snug dug-outs. This clip starts with puffin burrows, and ends with the masses of sea birds nesting on the cliff-face:

Here are some of the burrows closer up. Tourists are (sensibly) restricted to paths and walkways to protect the fragile nesting sites. 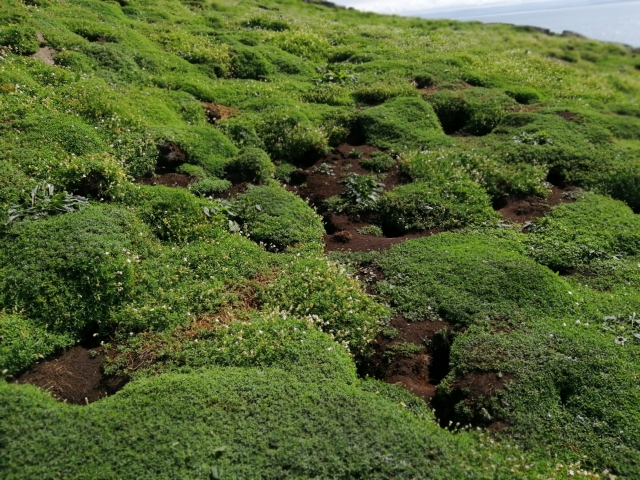 Moving closer to the cliffs, we witnessed the massive challenge puffin chicks have to face just to get off the island, as skuas attack them while they try to fling themselves off the cliffs. Keep your eyes on the top right of the video, and you’ll see a mass of young puffins racing towards the edge, and one making a successful dive off.

And this time, a few more make it. Spot the skua attack near the start.

Having now seen puffins, we headed over to the other side of the island, back past the harbour, where the RIB had now arrived. 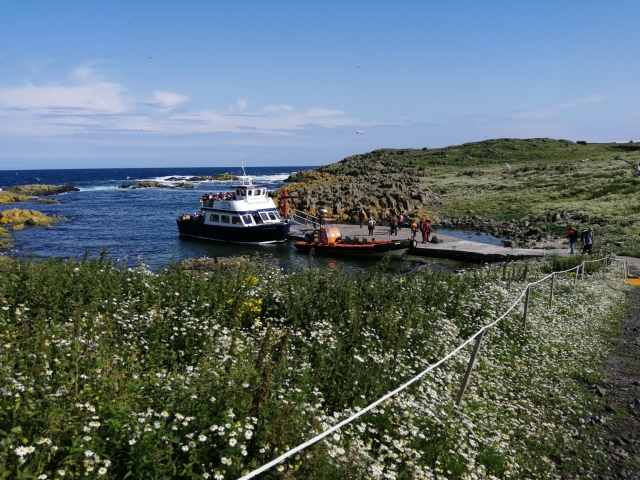 And then onward, to more cliff nesting sites 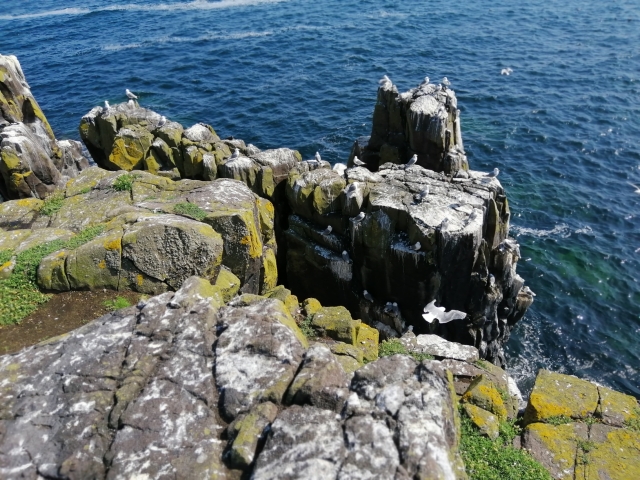 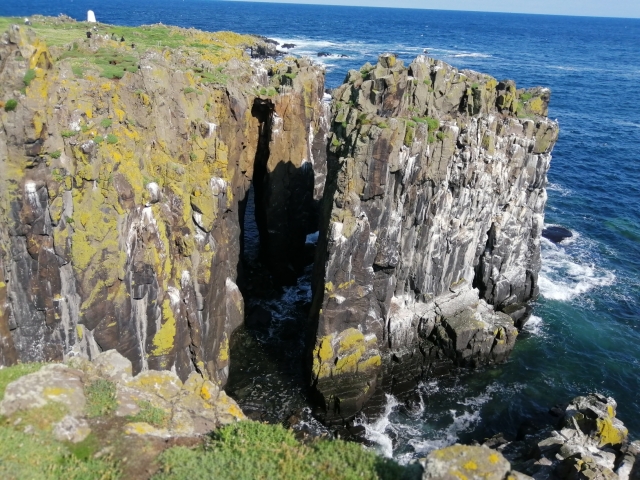 The original was a somewhat less impressive affair! 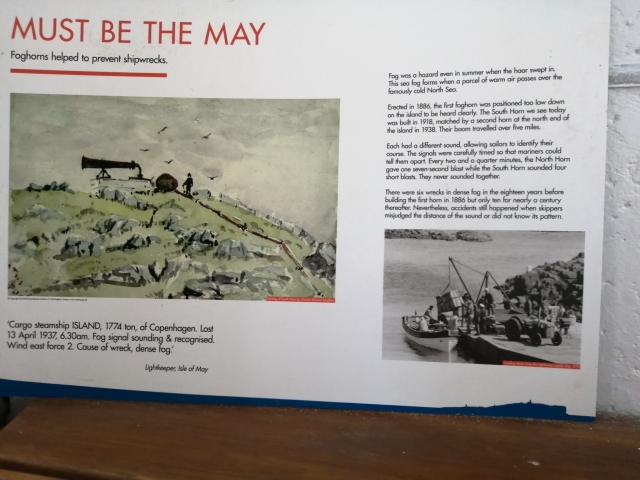 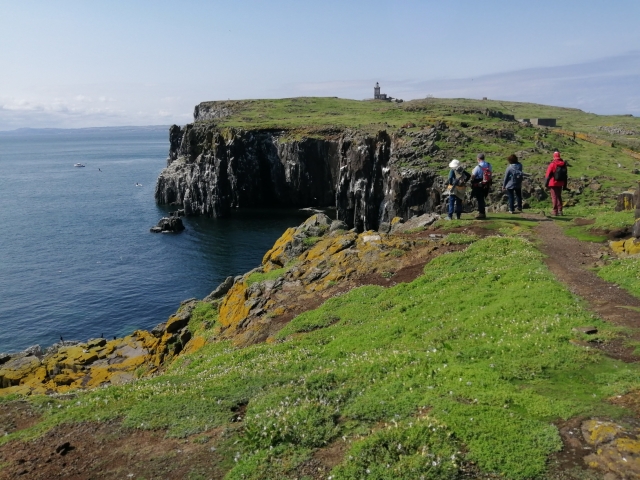 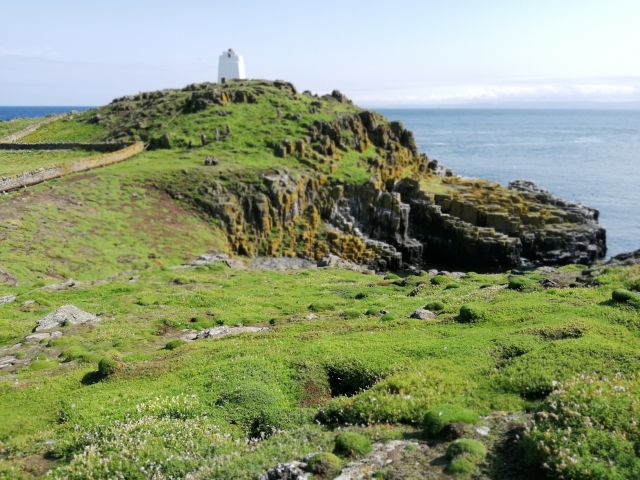 We found a pair of cormorants snuggling up 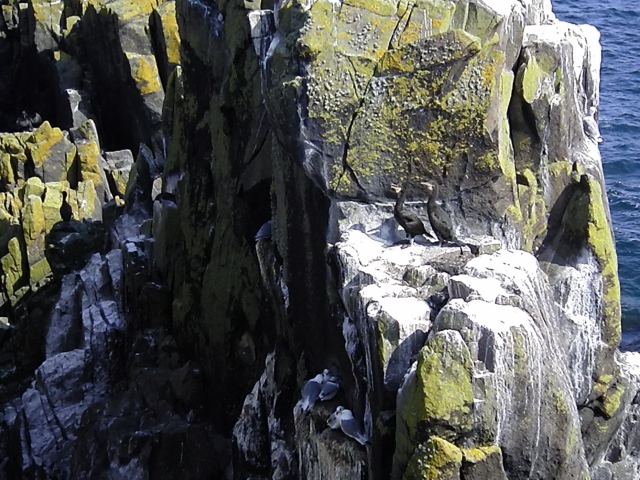 That’s the close up – here’s the full view: majestic, isn’t it? 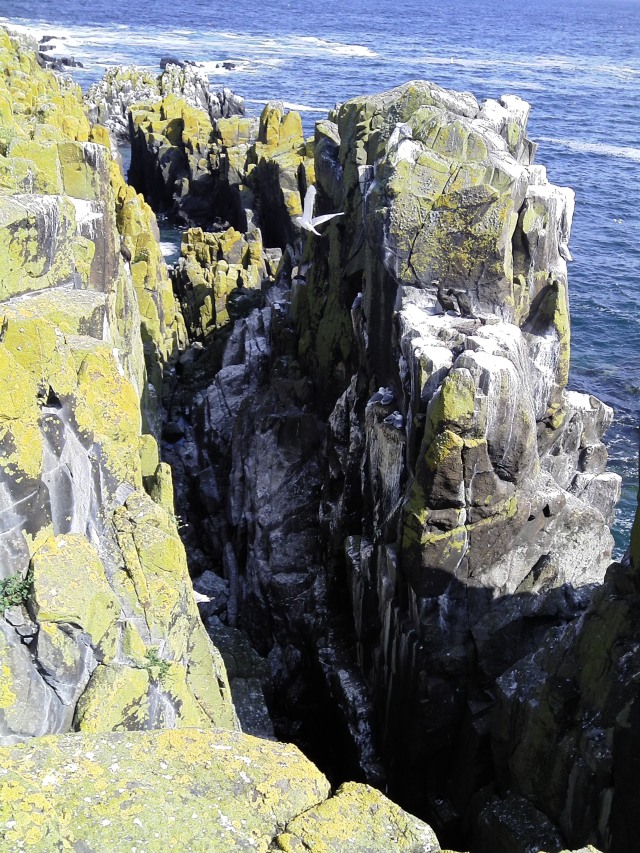 And then it was time to leave – not as easy as it might sound!

We sat aboard while everyone embarked and soaked up a last view of swarming birds while we, in turn, were watched by a seal who was bobbing lazily in the inner harbour

We watched as the RIB set off, heading for that narrow gap in the rocks

And then it was our turn – apologies for the end of this clip, keeping the camera steady enough to see anything but water was nigh on impossible by the time we hit the rough stuff!

Some of those rocks were scarily close!

As we headed back along the coastline, we not only got a really good view of the fog horn, we also started to spot how many caves are gouged into the sides of the island’s cliffs 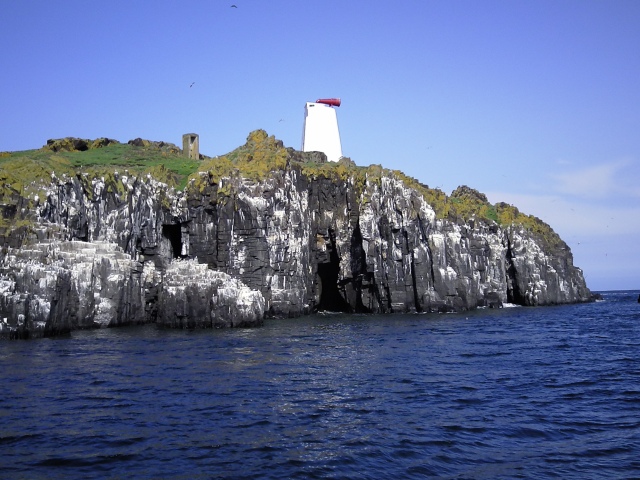 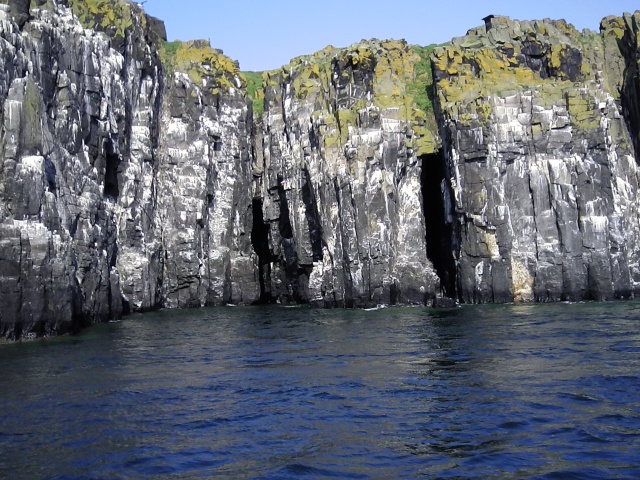 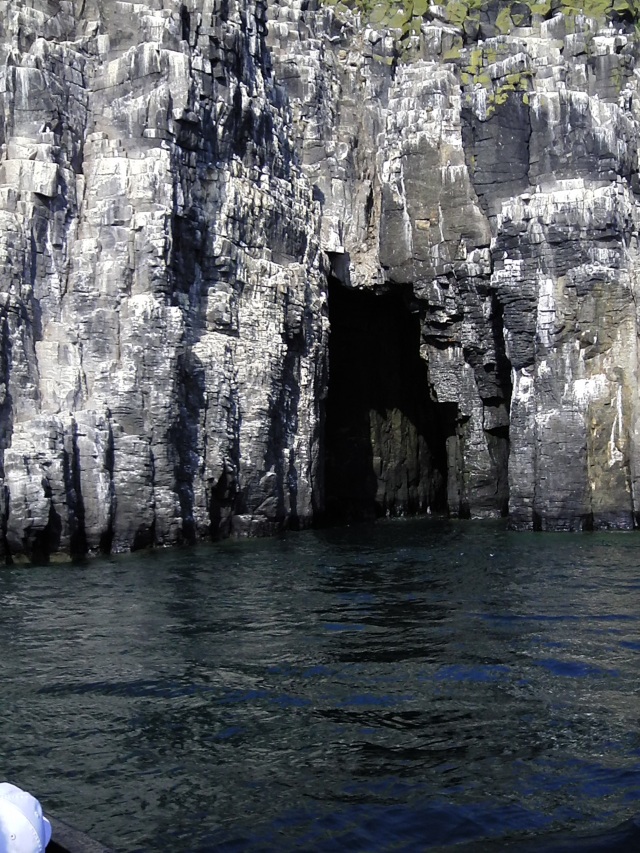 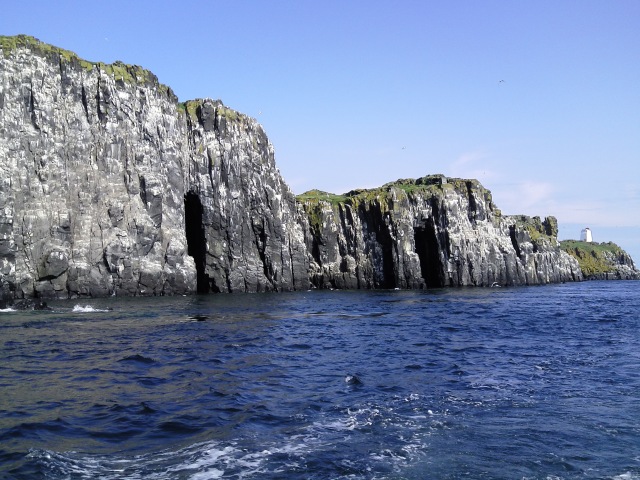 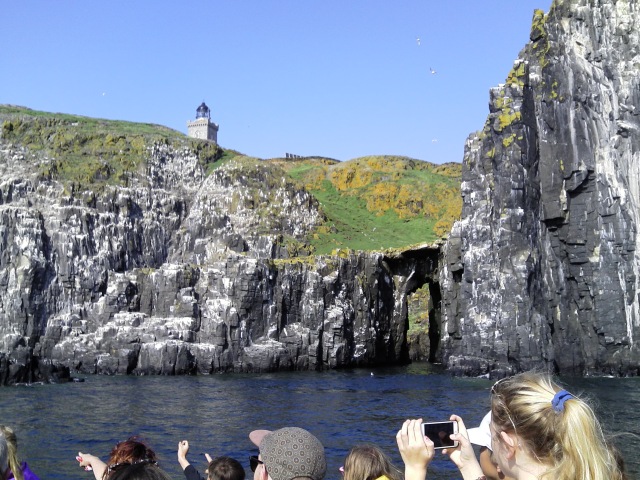 And so, back to dry land (with, at last, dry underwear!), and a well deserved fish and chip meal at the hugely popular Anstruther Fish Bar where, naturally, the fish is exceedingly fresh! 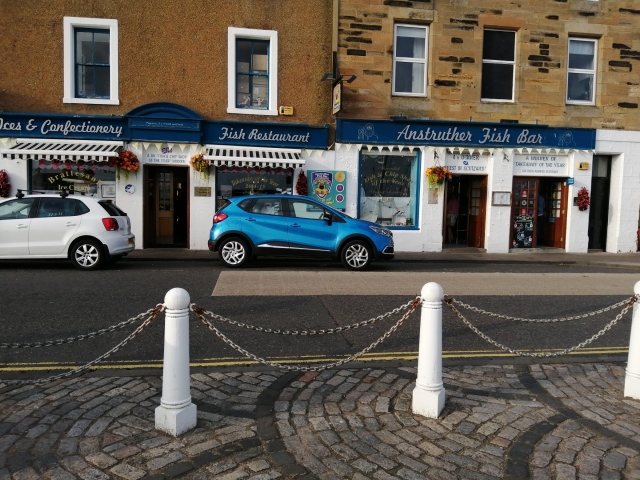 And the napkin says it all! 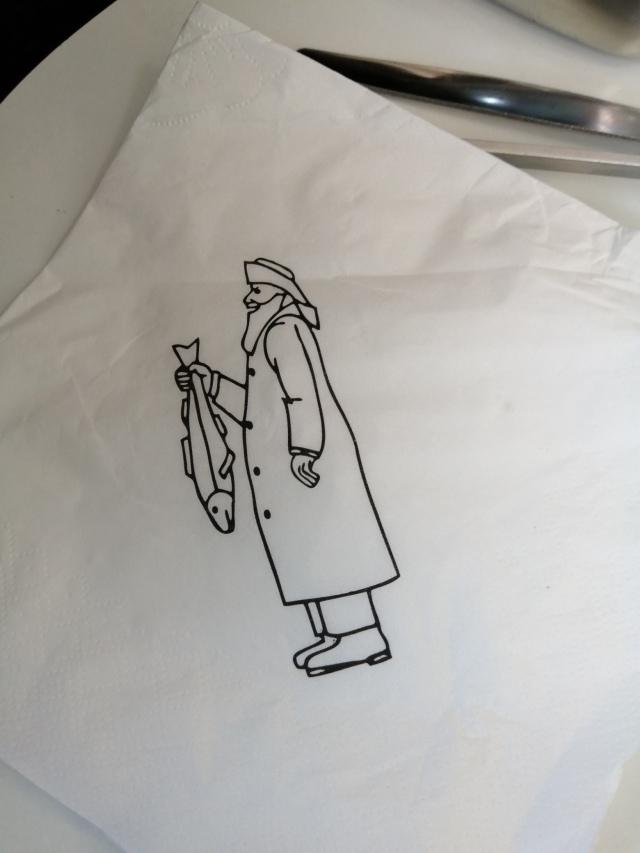 ← Sally’s Cafe and Bookstore – Sunday Interview – Deborah Jay with an extract from The Prince’s Man – Book One of The Five Kingdoms Series
Wild and Majestic – an exhibition at the National Museum of Scotland, Edinburgh →