Back to reviewing – this time, book #2 in the Northumbria mystery series by Ian Martyn – contemporary mystery with more than a touch of the paranormal and supernatural.

Brexitus – An Inspector Kirby Northumbrian Mystery by Ian Martyn
My rating: 5 of 5 stars

Inspector Kirby returns for another weird adventure, once more stretching the weird scale beyond anything remotely resembling just plain weird.
There have been some odd sightings near the remains of Hadrian’s Wall. Are the ghostly Roman soldiers just figments of imagination, kids trying to scare visitors, or even locals dressing up for re-enactments? While the odd mountain bike has been purloined, nobody gets too excited until the Chief Inspector’s mother’s dog, Angus, is snatched by a Roman soldier, and it’s captured on video.
When Kirby and his Constable, Shirley Barker, are tasked with recovering Angus, it isn’t long before they find it necessary to consult Harold Longcoat and his friends, guardians of the gateways between worlds and times. Before long, the intrepid coppers are up to their ears in genuine Roman artefacts that appear surprisingly less than ancient, bootleg gin, missing dogs, and magic that is threatening to blow the gateways wide open and allow the Roman army onto the streets of Northumbria.
I am so enjoying this series of books. Martyn has a wonderful knack of juxtaposing the mundanity of normal police work against the truly eccentric characters that fill his books in such a manner you can’t help but accept the possibility it might all be real.
The relationship between Kirby and Shirley, both excellent police officers but of completely different generations, is marvellously drawn, with much of their dialogue causing me to laugh out loud as they see things from their different viewpoints. I particularly appreciate Kirby’s frequent references to the pop culture of his age group, because it’s also mine.
The brief interludes with the desk Sargent and the wildly eccentric challenges he must face from the day-to-day walk-ins to the police station is likewise a source of great hilarity, both to Kirby and to me.
The mystery expands in unexpected directions, exposing a few more unsuspecting normal people to the reality that our world does not exist alone, and many the characters from the first book are also here, developing stories of their own to complement Kirby’s. This time around for me, the climax and wrap up were totally satisfying, and my only tiny niggle was one of style – to me, a distinct shortage of punctuation, particularly commas, which I found made some of the sentences tricky at first reading.
I highly recommend these books to anyone who enjoys a light-hearted police paranormal – if that doesn’t sound too weird!

So, as promised, the special offer:

Until the 17th only, you can pick up book #1, Inspector Kirby and Harold Longcoat, for FREE!

If you are in the US, click on the cover below, 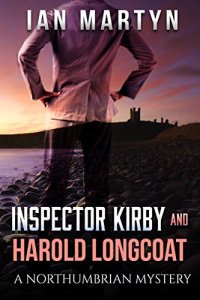 Go on, try something different…