While my creativity is still on hiatus, I’m going to finish up the rest of our tour of the Inner Hebrides.

I opted for 3 days on Mull, and I’m SO pleased I did – we would never have crammed it all into 2 days, and there are still things left over we didn’t get to see. Already planning for our next trip…

This last day on Mull, we started off by heading around the western coastline, 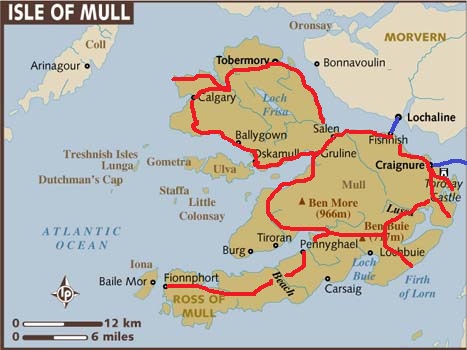 Our first stop was Glengorm Castle estate, which has diversified into accommodation, a café, a wildlife project, and has numerous walks, both guided and unguided, taking in some spectacular countryside and coastline, with ancient historical sites to boot!

What a spectacular view to look out onto – check out the vast range of accommodation on offer, both inside the castle and in the grounds – I’m very tempted: http://www.glengormcastle.co.uk/

Not far from the castle we came across this miniature stone circle – around 4000 years old. 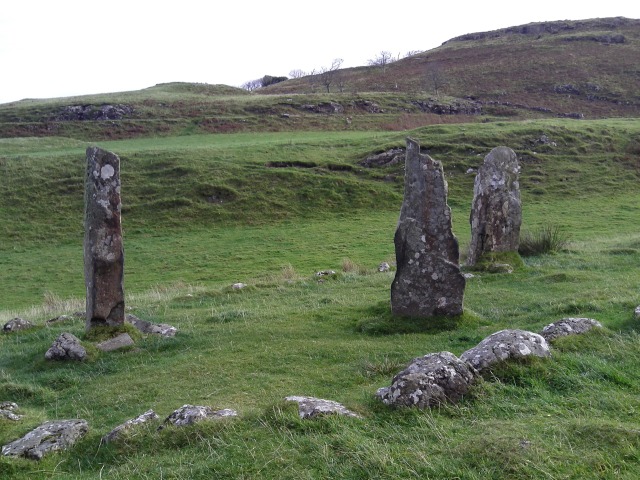 Tiny, compared to the stones on Arran, but never mind, its still an amazing feeling to get up close and personal with a silent sentinel of that age.

We didn’t have the time to do the full 2 hour walk, which would have led all the way down to the coastline, and Dun Ara – site of a medieval castle fort, so these photos must suffice.

Another good reason I want to go back again, with more time available.

Driving back down the glen (after sampling the goodies on offer in the lovely café), we passed through an area of bleak mountainsides we now associated with Golden Eagle territory. And yes, we saw two more soaring above.

After a brief stop to watch these magnificent raptors with our ever-ready binoculars, we continued our journey up over a high pass, and down towards the village of Dervaig, which has a beautiful viewpoint, rather popular on the day we were there, and, I imagine, very busy during high tourist season. Which, by design, this was not. 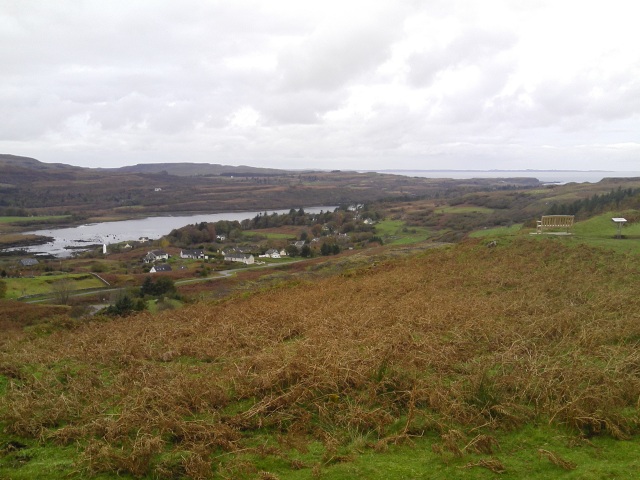 And then it was onward, to Calgary beach, a gorgeous stretch of white shell sand in a sheltered bay.

And yes, this is the origin of the name of Calgary in Canada.

From Wikipedia: “On the East side of the bay Calgary House, now called Calgary Castle, was built in 1817 extending an earlier Calgary Estate laird’s house. Colonel James Macleod, Commissioner of the North-West Mounted Police, was a summer guest here. In 1876, shortly after returning to Canada, he suggested its name for Fort Calgary which gave rise to the city of Calgary, Alberta.”

It wasn’t the sunniest day, but still a beautiful site to visit.

Travelling onward along the coast, we came to the truly spectacular Eas Fors Waterfall – with the amusing triple tautology name. From http://www.isle-of-mull.net/attractions/scenic-attractions/eas-fors-waterfall/ : “The ‘Eas Fors Waterfall’ place name is tautological as all three words are synonymous. This often occurs when a name from one language is imported into another and a standard descriptor is added on from the second language. Eas is Gaelic for waterfall, Fors is Norse for waterfall so it could be said that Eas Fors Waterfall is labouring the point slightly!”

There are three levels of falls, with the upper and middle falls easily accessible, but the lower fall is only visible by driving further down the road and walking back a half mile along the beach. Another day, perhaps…

Lower falls (as much as was visible from the top – not recommended for leaning over, its quite a dangerous site!

The landmass at the end of that clip is yet another island – the Isle of Ulva, which translates from the original Viking to ‘Wolf Island’. Last year, ownership passed from a private family to a community group, and is accessible to the public by an ‘on demand’ ferry, from Easter to October. With rich bird watching and an island without tarmac roads (the current 20 residents get about on quad bikes), this is another on my ‘to do’ list.

We’d now traversed all the roads on Mull, so cutting back across the middle of the island, we headed for my last planned stop of the day: Duart Castle – an imposing building we’d seen from the ferry on arrival.

Currently shrouded in scaffolding, the castle is undergoing extensive renovations, but much of it was still open for public viewing.

And here’s that rowan tree (wrong time of year for a nice pic, but never mind)

This is a picture on display, of the castle minus scaffolding

Inside there is a small museum, cram packed with historical artefacts from the house and clan history

An impressive selection of dirks

And a model of the castle 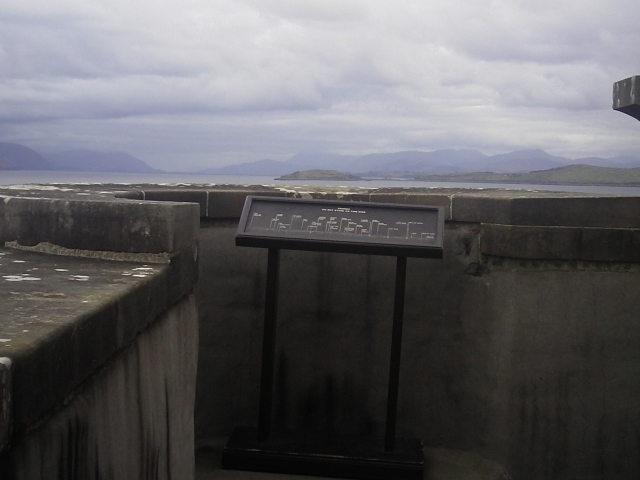 Leaving this peaceful site, I couldn’t resist stopping to take a few more pics, looking back 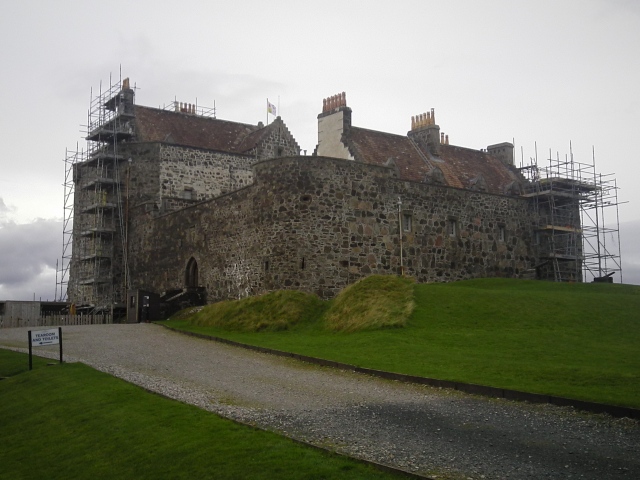 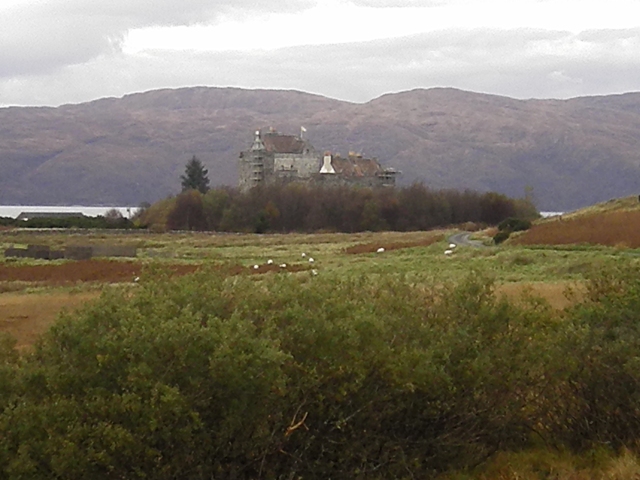 Perhaps by my next visit, the renovations might be complete!

So, one more night on Mull, then onward, over the sea to Skye…