To reach our next destination, Mull, we needed to drive up the west coast to Oban. All of the west coast of Scotland is beautiful, but this trip didn’t give us any spare time to stop and admire views, as the time between ferry sailings was pretty tight.

We’d already explored a lot of Oban on two previous trips, one of which is detailed here

I had the chance to take a couple of photos once we were on the ferry, the first in harbour looking up at McCaig’s Tower (see linked post)

Perhaps you can see, it was raining again, though that didn’t matter much as the day was mostly travel, car/ferry/car/ferry/car.

As evening drew in, we arrived on Mull and drove up to the quaint and pretty town of Tobermore,

where we were staying the next three nights. 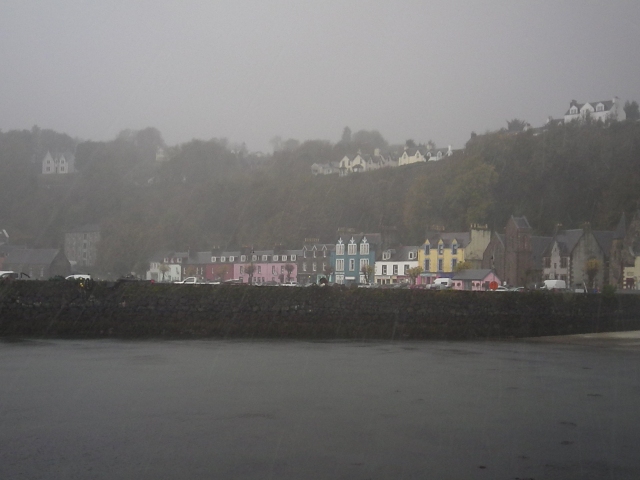 You might notice the rain, but the next day’s forecast was so much better…

A quick side note – Tobermore is the village used for the highly popular BBC kid’s TV show, Balamory, which ended in 2005, but is constantly on re-runs for further generations. It was chosen for its multi-coloured and quirky houses.

Our B&B was tricky to find, right up above the town, taking tiny narrow roads with hairpin turns, but soooo worth it! If anyone plans on a visit to Mull, I highly recommend Fairways Lodge – an indulgently comfortable and quiet guest house overlooking the golf course, run by a single guy who cooks the most amazing breakfasts – especially fish. Which, of course, is the main diet on the island, being as it is all exceedingly fresh.

After a good night, and a strategically light breakfast the next morning, we set off for a very special trip I’d booked in advance – to see the island of Staffa.

I’d been watching the weather reports obsessively, hoping we’d be able to take the trip, and by good fortune, the winds dropped enough for us to go. You’ll see why this trip was so special in a moment…

It takes just over an hour to drive from one end of Mull to the other, Tobermore to Fionnphort, which we needed to do fairly early in the morning, so it was, of course, a good time to keep an eye out for wildlife. We were rewarded with the beautiful sight of a magnificent red stag rounding up his hinds. I have no idea how he selects them, as there wasn’t another stag nearby, but this guy had cut half a dozen out of a larger herd and was shepherding them away.

Perhaps he knew he could only hold onto that many?

Too far away for photos of this particular incident, here’s one I took of a stag elsewhere

These guys are about the same size as a moose.

Arriving in Fionbphort, we walked down to the slip – just a large concrete slip with the ferry parked by the simple process of coming up onto the concrete pad with a loud grinding sound until it can’t come any further, then lets its front down for passenger access. No sophistication here!

The ferry to the left in this clip, takes the 10 minute trip over to the island of Iona (more later on Iona), and the boat heading away is the other tour boat to Staffa, but the dinky little job zooming in on the right was the one we took

Now prepare for a wild ride!

I took seasickness tablets before the trip, and it was such a good idea – you might need some yourself in a moment, when you watch one of the videos…

First, to give you an idea of the boat size, here’s the cabin 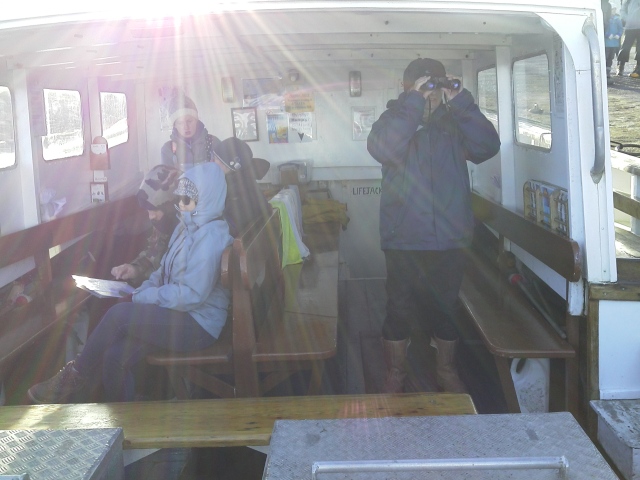 There were around 20 people on board, including crew.

You can see from this short clip that the boat doesn’t hang around!

This was looking off the starboard side towards the coastline of Mull, while off to port, we passed Iona Abbey, which I’ll cover in detail in my next post.

And then we left land behind and headed out into open ocean, and a bumpy ride. There were times when I had to force myself to relax and accept the crew knew what they were doing, and we really were safe in such high seas on this tiny boat. This clip will give an idea of the yaw

The crew, Iona natives, were fabulous, keeping us entertained by pointing out landmarks in the distance – lots of other islands, plus right through a deep groove in the mainland to Ben Nevis, the tallest mountain in the UK, and much nearer, a tiny dot of an island which was the inspiration for Berk, the island home of Hiccup, from ‘HOW TO TRAIN YOUR DRAGON’.

After about an hour, the dark lump in the ocean ahead began to resolve from something resembling an aircraft carrier, into the awesome basalt pillars of Staffa

Staffa, in Old Norse, means pillar island and now you can see why 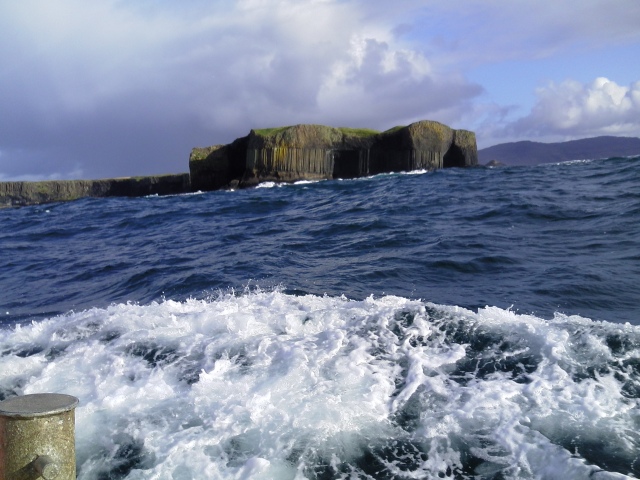 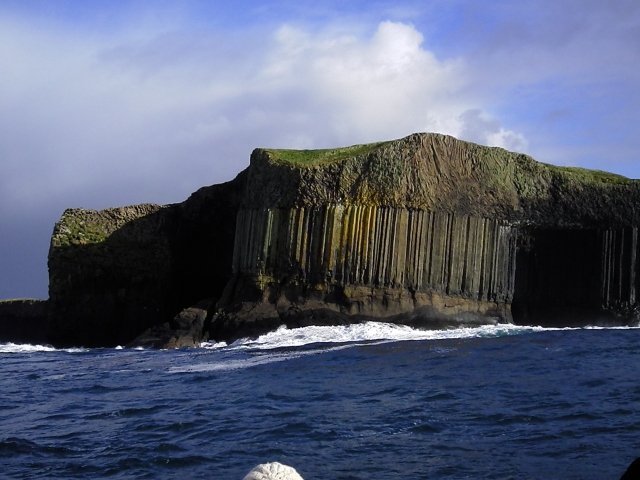 In this one below, you can see the ‘boat cave’. Our skipper, who has been doing this trip twice a day for 30 years, says the sea has only been calm enough for him to get inside there 5 times in his lifetime.

And then we move on to FINGAL’S CAVE 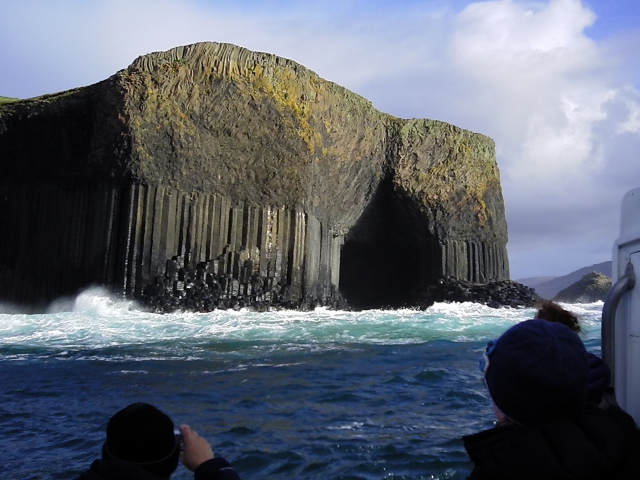 To quote Wikipedia, “Fingal’s Cave is a sea cave on the uninhabited island of Staffa, in the Inner Hebrides of Scotland, known for its natural acoustics. The National Trust for Scotland owns the cave as part of a National Nature Reserve. It became known as Fingal’s Cave after the eponymous hero of an epic poem by 18th-century Scots poet-historian James Macpherson. For the concert overture of the same name by Mendelssohn, see The Hebrides (overture)”

The sea was such glorious colours, and all that froth in the foreground?

We had already been warned that even if we could land, we wouldn’t be able to get inside the cave, as the internal  walkway has been washed away, and the National Trust have not yet been able to rebuild it, As it was, the day was too rough for landing anyway.

Here’s the other tourist boat hightailing it for home 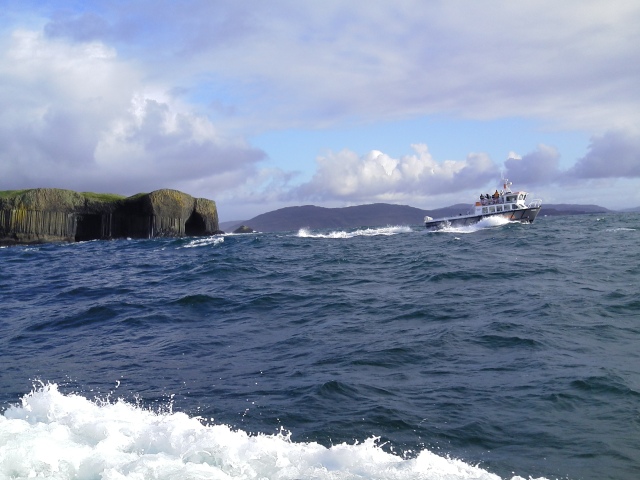 But we were made of sterner stuff!

Or at least some of us – by this time there were some very green faces on board, and one poor guy who had retired to the cabin after the first 10 minutes with his head in his hands, and never left it.

We went on around the side of the cave, towards the slipway, which you can just see in the centre of the last frame of this clip

Here’s a close up of what we would have been negotiating, if we’d been able to land – you can make out the handrails

And here’s the slip – the concrete steps bottom right 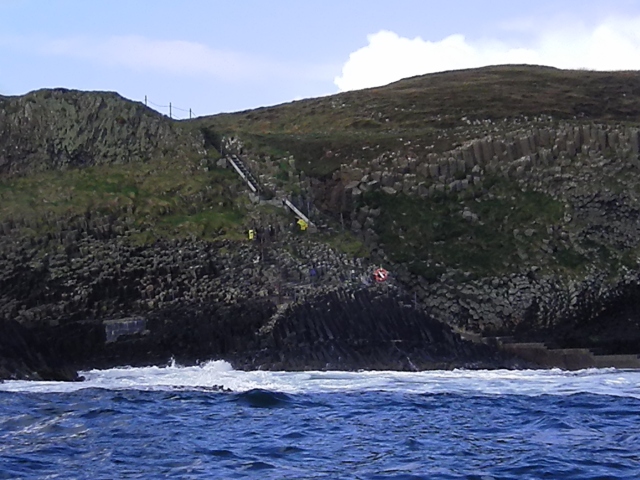 You can make out an orange life ring at above the landing stage, and the yellow bags above are bags of concrete ready for repair work. You can also see the steep steps leading up to the top of the island. I would love to come back again in early summer, when the island is used as, amongst other things, a breeding ground for puffins.

We carried on along the length of the island, stopping on two occasions opposite sandy coves where, with binoculars, we watched several huge, white seal pups. These were actually Atlantic grey seals, though the pups are pure white. Then in the water we saw both grey seals and common seals together – boy, those greys are HUGE.

We saw many varieties of gull, and lots of cormorants, but most thrilling was a close-quarters fly-by from a gannet, – a really BIG, beautifully streamlined sea bird.

Eventually we headed home, and I noticed a few more rather sick-looking fellow sailors. At this point, I took another tablet, and so glad I did – the sea was no more kind on the way back, and a couple of our fellows lost their breakfasts over the side. I’ve done that before, on a whale-watching trip off Vancouver Island, and these days I always take the Kwells with me for safety.

Instead of landing back on Mull, we took the option of landing on Iona, which I’ll cover in my next post.

Hope you enjoyed this exhilarating trip to a unique Hebridean island.