There have been so many other things to write about in the past few months, I failed to get through all my intended posts about my October tour of the Outer Hebrides, so I’m picking that up again now.

Here we are, moving on from South Uist to North Uist.

North Uist covers 117 square miles, slightly smaller than South Uist, and is connected via another causeway to the mid-sized island of Benbecula, and also to the small islands of Grimsay and Berneray.

Benbecula, I’m afraid say, failed to capture my imagination and produced no photos at all 😦 It does include a commercial airport and a riding centre, but no picturesque scenery. The one castle we found, quite ancient by appearance, had been all but swallowed by the farm in which it sat, having farm buildings built onto two sides of it. Seems rather sad for what was probably  once the seat of an important lord (or laird).

So back to the Uists – something you see all over the place is this:

Those are peat bricks. Many house owners also own a bog! Not necessarily that near their property, so the bricks have to be cut (you pay for the man with the machine to come along and cut them for you, unless you are really fit!), and then transported to your home. They burn quite fast, so you need a lot of them, but its obviously worth the effort.

The peat bogs are also a haven for wildlife – this guy certainly looks at home.

This was taken at dusk, hence the fuzzy light, but this is a typical scene on the islands – lots of open space.

One of the other noticeable things was that there are plenty of oddities, like this folly, standing in the middle of nowhere, with no information available to tell us what they are.

By doing some digging (no, not the peat) I found out that this place, like a number of others, was paid for by a landowner to provide work for unemployed men for the purpose of famine relief. It’s a Georgian folly built in 1830, called Scolpaig Tower, is built over an Iron Age dun (something else they seem to do a lot – build over ancient sites), and although it appears to be rectangular, it is apparently octagonal. It’s inaccessible to anyone except the birds that nest there.

Wouldn’t it be lovely if people provided work like that these days?

Probably the main part of our day on North Uist belonged to the RSPB (Royal Society for the Protection of Birds) Balranald reserve – several miles of coastland preserved for the wildlife. 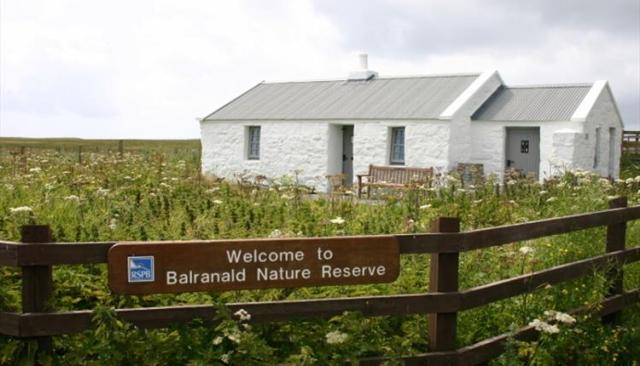 This reserve takes up a fair chunk of coastland, with long stretches of beach, sand dunes, grassland and rocky coastline. There are a number of trails to follow, and we took what I thought would be a fairly quick 5 and a half km trail, which ended up taking well over 2 hours!

Now that isn’t because we are slow walkers – there were numerous stops to scan land, sea and sky with binoculars, and some of it involves scrambling over wide stretches of unstable rock – no wonder they suggest sturdy walking boots! 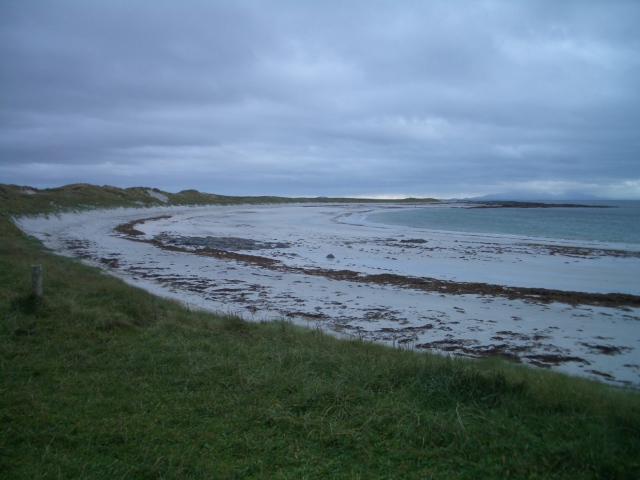 One of the draws was the potential for seeing sea otters. Sadly none presented themselves that day, but we did follow a number of seals playing in the shallow waters, and watch corn buntings, lapwings and turnstones all along the shoreline. No sign of the illusive corncrake, one of the major reasons for this reserve, but hey, it was a lovely walk nonetheless.

Travelling on, and still on the outlook for standing stones, I thought I’d triumphed when spotting this one, though on closer inspection it turned out to be rather more modern that I was seeking!

Here’s a close up of the plaque.

The plaque on this stone commemorates the Paiblesgarry Land Raid of 1921, on the Balranald Estate. A group of local men had been promised land if they signed up to fight in the First World War. When the survivors returned and tried to claim the land they were denied. They attempted to take the land and were all sentenced to 60 days imprisonment, although they did not all serve time in prison. Farms were eventually set up on the land as crofting land settlement schemes. The plaque lists the names of 12 participants in the raid.

This sort of failed promise sadly seems to have been a rather too frequent tale in Scottish history.

That evening we dined at the fabulous Langass Lodge

where the décor, ambience, and the food were all quintessentially Scottish, and the other diners typical huntin’, shootin’, and fishin’ enthusiasts, boasting loudly about their days. At any other time that might have been a bore, but these guys provided out evening’s entertainment in spades!

Next morning it was back to ferry travel as we continued on from the ferry port on the tiny island of Berneray (2 miles x 3 miles) across to Harris. 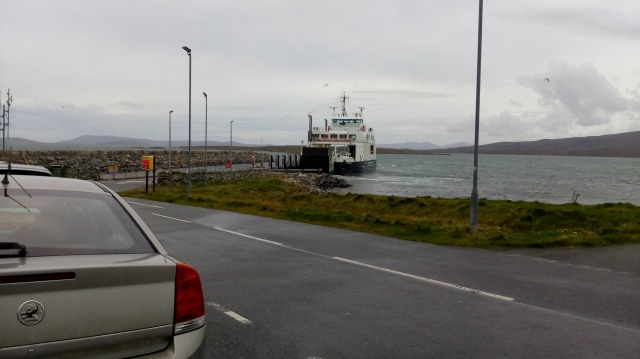 This was a somewhat larger ferry with an inside cabin, thank goodness, as the weather was still wildly windy and now also raining!

This was probably the most hair-raising ferry trip of them all, because the channel the ferry has to follow is extremely narrow, between many tiny islets and raised chunks of rock. We could feel the challenge the pilot was having keeping the ferry on course between the close-spaced buoys that mark out safe passage. At one point there is a 90 degree turn to negotiate – great fun when battling the remains of a hurricane.

We did spot a number of seals during the trip, looking rather more at home in the choppy waters than our ferry! I didn’t manage to get any footage as they popped up and down quite randomly (as seals do), but this last clip should give you an idea of the nature of the channel.

Next up: 2 days on Harris, home of the world famous HARRIS TWEED..