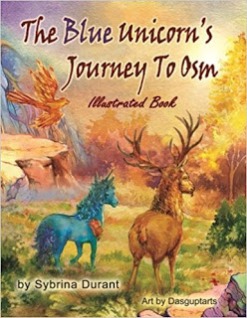 “The metal horned unicorns are doomed!” That’s what Lauda Lead Horn wailed when she first saw the tribe’s new savior. OK, so
his horn was not metal. . .and he did not have a magic power. . .and he was really a puny little runt. But doomed? Were things really that bad?
Well, things were pretty bad in the land of MarBryn. Magh, an evil sorcerer utilized unicorn horns and hooves to create his
magical potions and spells. Those he used, to increase his power and to conquer everyone in his path. All of the unicorns from the Tribe of the Metal Horn were now gone . . . except for twelve survivors.
Before the blue unicorn was born, Numen told Alumna, the aluminum-horned oracle, that he had a plan to bring the tribe back
home to Unimaise. His prophecy was, “Only the blue unicorn can join with the Moon-Star. Until then, no new unicorns will be born.” Blue was the last unicorn born. Twenty years later, his horn was still covered with a plain blue colored hide. There was not a glint of metal to be seen on it or his hooves. And he still didn’t have any magic. But he was no longer scrawny and he had his wits.
Though no one else in the tribe thought he had a chance, Blue felt ready to make Magh pay for his evil deeds. And he went off to do it alone. That was Blue’s first mistake. If the entire tribe was not standing horn-tip to horn-tip at the proper time and the exact place to help usher the Moon-Star Spirit into Blue’s horn, he would die. Then, the rest of the tribe would really be doomed.
Readers will follow along two journey paths in this book. Blue is joined in his travels by his mentor Gaiso, the Stag and his friend, Girasol the Firebird as they try to find their way across a danger-filled MarBryn to Muzika Woods. The rest of Blue’s tribe is forced to follow another route due to Nix Nickle Horn’s unfortunate incident with a Manticore.
Nix, the great unicorn defender must safely lead the way for Ghel, the Golden-Horned unicorn; Silubhra Silver Horn; Cornum the Brass-Horned
unicorn; Steel Horned Style; Cuprum the Copper-Horned unicorn; Tin-Horned Tinam; Dr. Zinko; Iown the Iron-Horned unicorn and the others in an action
packed adventure to their destination in Muzika Woods. Both journey paths converge there in the Nebulium Circle.

The Blue Unicorn’s Journey to Osm Illustrated Chapter Book by Sybrina Durant
My rating: 4 of 5 stars

Blue is a unicorn of prophesy, destined to save his people, the metal horned unicorn tribe, from an evil sorcerer. But when he is born without a metal horn, the very thing that gives each unicorn a unique magical ability, the rest of his tribe cannot help but feel let down.
The little unicorn grows up knowing he is a disappointment, and becomes a loner aside from sweet Ghel, who loves him anyway.
When the unicorn oracle again prophesies that Blue will save the tribe and this time has knowledge of what must happen for them to survive, the adventure of a lifetime begins.
This author has a truly vivid imagination – the world, the creatures, the characters and the magic sparkle with dazzling multi-coloured imagery. Each chapter of the book version I read began with a colour image to set the scene (there are several versions, including one with black and white images ready for colouring in). The entire story abounds with colourful descriptions and happenings, and the plot is a little more complex than I anticipated, involving both space travel and metaphysics. The cast of secondary characters are fabulous, so different to each other and so complementary, they brought depth to the themes of friendship, self-respect, and never underestimating oneself. I do think some of the minor characters didn’t need to be named, as that just gave a few too many names to remember.
I really enjoyed reading this story, even though it is way out of my usual zone. I did, however, struggle to place exactly what audience it was aimed at. Twelve to eighteen is the suggestion, but also suitable for adults. For me, I would have put it, on the grounds of the descriptions, characters, names and humour, to be for readers younger than twelve. On the other hand, it is quite long, and touches on themes of evil and death probably not so appropriate for a younger age range.
Having said that, if you have children who love colour, magic and mythical beasties, I would definitely suggest this as a family read. 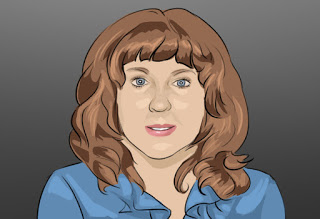 I’m Sybrina. . .. .
.Just one of millions of wannabe author/singer/songwriters out there but I hope, after reading or hearing my books and songs, you’ll think my contributions to the world have as much value as any other famous artist out there today.
Fame is all in being in the right place at the right time but at least with the internet and venues like this, all of us have opportunities to share our creativity with the world. I’m so happy that I am able to share my works with you. That is awesome!
The books I’ve written span a wide range between illustrated picture books, coloring books and YA novels to technical and how-to books. If you’re so inclined you can read a little bit about the inspiration for each one below.

My latest effort is
“The Blue Unicorn’s Journey To Osm. It is a book I started writing 30 something years ago and never finished. At the time, it was meant to be an epic fantasy along the lines of novels written by Tolkien, Piers Anthony, Ursula K. Le Guin and other amazing fantasy writers. I’ve pulled out my notes, dusted off the outline and began rewriting and expanding upon the 50 pages I had began. This story is now available as an Illustrated Book for teens and older readers in full color and in black and white, too. The black and white version is a “Read and Color” book. Read a chapter, then color the following pages. How fun is that? There is also a picture book for pre-schoolers called Unicorns From Unimaise – The Magical Metal-Horn Trobe. A longer version of the chapter book will soon be available as an Illustrated Novel with a companion glossary called, The Marbryn Compendium. All of the fantastic fantasy illustrations are by Dasguptarts. There is also a companion coloring/character description book, edited by Calyie Martin. It will introduce potential readers to the myriad of characters, places and things in the story.
Website * Twitter * Goodreads