A much needed day out – Hampton Court #FlowerShow

The entrance to Hampton Court Palace, site of the flower show 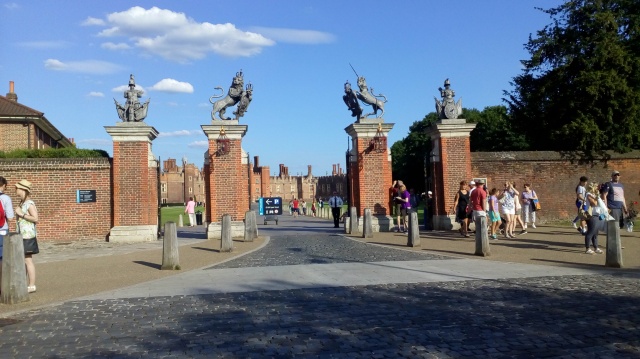 This has been a very strange week. My father died on Thursday – not at all unexpected – he was 98 and had been sent home from hospital over a year ago, to die at home. Their estimate of his remaining lifespan was short by about 11 months. It was a merciful release, but the emotions that come on the back of such an event are mixed and confusing, so a day out at the weekend looking at beautiful plants and gardens was a welcome diversion. I wasn’t sure until the last moment that I would go, but I’m glad I did.

It was a glorious day, at times too hot, especially as I forgot to take an sun crème, and so did the friend I went with. This entailed many stops in the shade for cups of tea, ice cream etc. – you understand 😉

The show was a little less interesting this year than previous years, in terms of stands. Obviously the financial climate is taking its toll, and many of the smaller, more unique stands were missing, replaced by the big fellas with their expensive garden furniture and buildings. There also seemed to be less in the way of show gardens, with many rather monotone palates, not my sort of thing – if you are going to have a garden, surely it should be filled with colour? I know mine is.

So when I found a really colourful garden, I thought I’d present you with a picture

Now that’s what I call colourful!

We also braved the tropical conditions inside the butterfly dome – something we’ve not found time to do previous years, and with the reduced number of interesting stalls, we decided to go for it.

Here are a few of the beauties we found

And hey, in the floral design marquee we found a close relative… 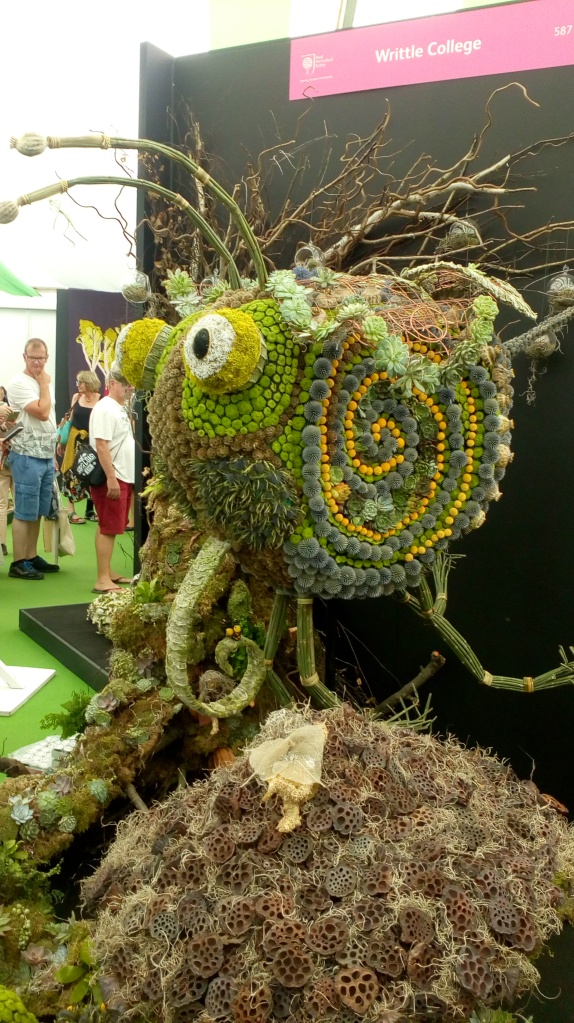 It was extraordinarily hot inside the butterfly dome, so standing on the pontoon bridge over the long water provided a much needed opportunity to cool down as well as to admire King Henry VIII’s palace from a distance.

Yes, those are gigantic (plastic) rabbits on the path…

And then it was home with the spoils – less than previous years, as the garden at home has only a few gaps to fill where plants have died or vanished, as plants do.

I needed one rose to fill a gap in the border, and this divine orange one goes by the name of ‘Living Daylights’. For a Bond fan, that couldn’t be more appropriate.

Did any other UK garden fans go?