Title: The Last Bucelarii (Book 2): Lament of the Fallen

A faceless, nameless assassin. A forgotten past. The Hunter of Voramis–a killer devoid of morals, or something else altogether? (The Last Bucelarii–dark fantasy with a look at the underside of human nature)

The Last Bucelarii (Book 2): Lament of the Fallen

The Hunter of Voramis is no more.

Alone with the bloodthirsty voices in his head, fleeing the pain of loss, he has one objective: travel north to find Her, the mystery woman who plagues his dreams and haunts his memories.

When he stumbles upon a bandit attack, something within urges him to help. His actions set him at odds with the warrior priests commanded to hunt down the Bucelarii.

Left for dead, the Hunter must travel to Malandria to recover his stolen birthright. There, he is inexorably drawn into direct conflict with the Order of Midas, the faceless, nameless group of magicians that holds the city in a grip of terror. All while struggling to silence the ever-louder voice in his mind that drives him to kill.

From feared assassin to wretched outcast, the Hunter’s journey leads him to truths about his forgotten past and the Abiarazi he has pledged to hunt. His discoveries will shed light on who he really is…what he really is.

Fans of Joe Abercrombie, Brandon Sanderson, and Brent Weeks will love the Hunter…

Beggar Priests? Trained warriors, in service to the Beggar God? Surely, they can’t be—

Mocking laughter echoed in his mind. ‘Fool! You ignored my warnings, and look what happens.’

“Is it your wound? Are you ill?” Worry painted Sir Danna’s face.

“I am fine, Sir Danna.” The Hunter tried to sound calm, though a maelstrom of fear, dread, and anxiety seethed in his mind. He scrubbed his hand across his face. “Just the heat of the day.”

The knight patted him on the shoulder and climbed to her feet. “Then rest, friend Hardwell. I will pray to the Beggar that you recover soon, for we ride in an hour.”

The Hunter gave Sir Danna a weak smile, which seemed to reassure her. Visibos stared at the Hunter, naked suspicion written in his expression.

Ignoring the apprentice’s scrutiny, the Hunter set his back against the tree and closed his eyes. He pretended to rest, but the demon in his mind denied him peace.

‘You must leave now! If you do not, they will discover your secret.’

I cannot leave. It will look too suspicious if I ride away now.

‘Then you have no choice. You know what you must do, before they find out who you are.’

Temptation warred within him. Caution warned him to heed the demon, but the Hunter had no desire to kill the priests. Not yet.

Soulhunger remains hidden. These featherglass lenses hide my eyes. My face is unknown to them, and they have no reason to suspect I am anything more than the simple soldier of Praamis I claim to be.

Who was to say the knights even knew of the Bucelarii? The truth of the demons and their offspring was a secret known to few. Could these warriors discover his true identity? Could he take that chance?

The demon raged. ‘They are servants of the Beggar God. They will kill you if you do not kill them first!’

A gentle throbbing in the back of his mind echoed Soulhunger’s desire. The blade, too, ached for death.

The Hunter would not give in. Not all priests of the Beggar God want my death! Father Reverentus—

‘The fool only used you to achieve his own ends! Even if he meant you no ill will, what makes you think these priests will be so understanding? Or have you forgotten the other priests?’

The Beggar Priests in Voramis had stared at him with naked hatred in their eyes. To them, he was worse than scum.

‘What if these two try to do what the priests of Voramis would not? Even if they do not kill you, they will drive you away.’

The Hunter wanted to protest, desperate to deny it. Yet in his heart, he knew it to be true.

The demon’s snarls turned to whispers. ‘This is why you hide your eyes. This is why you hide Soulhunger and the Swordsman’s blades. Not all who serve the gods are as accepting of you as the old priest in Voramis. You are afraid they will discover the truth. The day you are recognized for what you really are, that is the day you will be forced to kill them.’

The Hunter’s eyes fell upon the sleeping form of Sir Danna. Gentle snores rose from beneath the leather cap pulled over her eyes. Visibos had lost himself in the pages of a book produced from his bag. The peace and quiet of the scene seemed a heartbeat from shattering. Only a weak disguise prevented them from seeing the true Hunter.

So be it. I will bid farewell to these knights.

A great weight settled on the Hunter’s shoulders. Just that morning, for the briefest of moments, he had shared something akin to camaraderie with his companions. Now he had to give it up, all for the sake of survival.

But not now. I must bide my time. The masquerade of Hardwell of Praamis will suffice until we can part ways.

I can’t ride away now. When I depart, it must seem natural. Better to avoid arousing the apprentice’s suspicion. Or would you have them hunting us to our journey’s end?

The demon relented, and the throbbing in his head faded to a dull ache. Rubbing his eyes, the Hunter drew the hood of his cloak over his head. He retreated into the comfortable darkness. He needed time to think, to craft a plan.

A gentle breeze wafted past, pushing back the heat of the day, though it failed to quiet the turmoil in his mind. Visibos’ quiet muttering and Sir Danna’s snores added to the peaceful calm of the shade, yet the Hunter found himself anxious to move on. The faster they traveled, the sooner he would be rid of the Beggar Priests.

He forced himself to stay awake, unwilling to relax for a moment, lest he allow his guard to slip. The morning’s ride had sapped his energy. The chill breeze cooled and calmed him, and his eyelids grew heavy.

Feed me! Soulhunger screamed in his head. Its intensity startled him, and he jolted upright.

Keeper take it! Can the accursed voices never fall silent?

Soulhunger whispered in his mind, demanding death. The demon remained silent, but the Hunter knew well its desires. A red haze tinged the edge of the Hunter’s vision, turning the world into a blood-stained blur.

He knew what they wanted. Why not give them the death they craved? It would be so easy. Sir Danna slept. Visibos’s book occupied his full attention. They would be dead before they knew what was happening. He could picture the empty eyes and pale faces of the two knights staring up at him, crimson pools of gore spreading outward.

The Hunter ached to feel Soulhunger plunging into the hearts of his traveling companions. He craved the rush of power. And if it meant he would be safe on his travels, perhaps…

I will not! He clenched his fists. He had given in to the voices far too many times in the past. No longer.

Andy Peloquin: Lover of All Things Dark and Mysterious 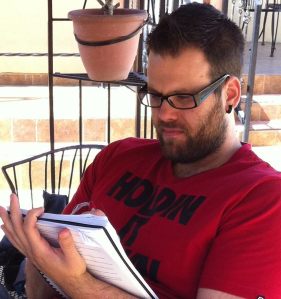 Andy Peloquin–a third culture kid to the core–has loved to read since before he could remember. Sherlock Holmes, the Phantom of the Opera, and Father Brown are just a few of the books that ensnared his imagination as a child.

When he discovered science fiction and fantasy through the pages of writers like Edgar Rice Burroughs, J.R.R Tolkien, and Orson Scott Card, he was immediately hooked and hasn’t looked back since.

Reading—and now writing—is his favorite escape, and it provides him an outlet for his innate creativity. He is an artist; words are his palette.

His website (http://www.andypeloquin.com) is a second home for him, a place where he can post his thoughts and feelings–along with reviews of books he finds laying around the internet.

He can also be found on his social media pages, such as:

10 Things You Need to Know About Me:

A Few of My Favorite Things

Favorite Songs: Wrong Side of Heaven by Five Finger Death Punch, Prayer by Disturbed, I’m an Albatraoz by AronChupa, Look Down from Les Miserables, Shatter Me by Lindsay Sterling and Lizzi Hale

Favorite Comics: Anything with Deadpool, Wolverine or Doop in it

“The fantasy world has a compelling new antihero…the Hunter will terrify and captivate you.” – Eve A Floriste, author of Fresh Cut

“From the first words on the page this fantasy holds the reader spellbound even after the book is finished…his character is very well-defined even if his past is a mystery. Root for an assassin? Oh, yes, one must!” — Carol Conley, for InDTale Magazine

“Oh the carnage! Fantastic bloodthirsty carnage! The fight scenes in this book were fast-paced, detailed and thrilling. I love a good sword fight and there is plenty of that here.” — Ami L. Hart

“One could get lost in this novel for its twisting plots, seemingly endless imagination, dark yet irresistible characters, or the mind-numbing paradox of its simultaneously dark and romantic world. One could follow the long and winding road of the dusky, fierce protagonist and fight tooth and nail not to sympathize with him. One could dance in the dizzying, intricate circles of Peloquin’s neo-mythology, or even basque in the black sunlight of a well-crafted gothic novel that both entertains and enlightens.” — Jesse G. Christiansen

See my review BLADE OF THE DESTROYER (The Last Bucelarii #1) here.