Welcome to my tour stop for Caught Bread Handed by Ellie Alexander! This is the fourth book in the Bakeshop Mystery series and released June 28 by St. Martin’s Press. The tour will have reviews and excerpts as well as a fabulous giveaway! You can find more information and the tour schedule on the tour page.

About the Book:
Welcome to Torte—a friendly, small-town family bakeshop where the oven is heating up as high as the body count…

Jules Capshaw is still chewing over her husband Carlos’s return to Ashland, Oregon. Could there be too many cooks in the kitchen? Whatever is stirring between those two will have to wait. Despite the Oregon Shakespeare Festival being dark for the winter, the bakeshop is bustling, the dough is rolling, and there’s no rest for the weary… especially when murder is thrown into the mix.

When Mindy Nolan, the owner of a new restaurant in town, turns up dead, the batter at hand thickens. Jules knows that there was bad blood between Mindy and others in town, and tracking the killer could prove to be an unwelcome treat. And to top it all off, there’s Carlos, who is pleading—with those delicious dark eyes and sexy Spanish accent—for Jules to take him back. Is home where the heart is or will she make a fresh start… and risk getting burned?

Goodreads | Amazon | Vintage Books (for signed copies!)
I do so love a fun cozy murder mystery! Here’s an

The kitchen was practically spotless with the exception of the spices she was organizing and a bag of almonds waiting to be placed back in the cupboard.

“Truce.” She picked up a bottle of cinnamon sticks. “I have important work to finish here.”

Mom kept her gaze on the spices. “So how are things going with Carlos here?”

I wasn’t prepared for that question. “Uh. Fine. I think.” I picked up the bag of almonds and walked to the far side of the kitchen.

“He seems very committed to making things work. Do you think he’s going to stay?”

“I know. I wondered if maybe he was reconsidering.” Mom placed the last jar of spice on the rack.

I returned to the island. “What does that mean?”

“Nothing.” She picked up the rack and slid it back into place on the counter. “I had the impression that maybe he was hoping for something more permanent.”

Mom joined me at the island. She reached out and touched my arm. “We don’t have to talk about this now if you don’t want to. I didn’t mean to push.”

“No it’s okay. I’m so confused. Having Carlos here is amazing. Everyone loves him—the staff, customers—everyone.”

“And me, but it’s complicated. He’s going back to the ship. I’m here.”

“Juliet, you know that I love having you here, more than anything in the world, but I want you to know that it’s okay to go. If that’s what you want or what you need for your marriage, I understand and I fully support you in whatever choice you make.”

“You’re trying to get rid of me, aren’t you?” I hoped that making a joke would lighten the mood a little.

She smiled. “Guilty as charged. Can you blame me? I can’t compete with my daughter’s world-class culinary talent. It’s not fair.”

“Everything I know I learned from you.”

“Ha!” She threw her head back and laughed. “Hardly. I’ve seen how you wield your pastry knife.”

I laughed with her. It felt good. “Mom, can I ask you something?”

“Honey, you know that you can ask me anything.”

I sighed. “Sometimes I feel like everything is spinning around me and I’m just trying to hold on.”

“Technically speaking the world is spinning around you.” She stepped closer and squeezed my arm. “A piece of advice, Juliet, stand in the center and let it spin.”

Before we could continue, the door swung open and Carlos came in. Speak of the devil.

Mom brushed her hands together and took off her apron. “We can talk later,” she whispered. On her way out the door she greeted Carlos with a hug and waved goodbye to both us. “See you bright and early tomorrow!”

About the Author:
Ellie Alexander is a Pacific Northwest native who spends ample time testing pastry recipes in her home kitchen or at one of the many famed coffeehouses nearby. When she’s not coated in flour, you’ll find her outside exploring hiking trails and trying to burn off calories consumed in the name of research. Follow her on Facebook or Twitter to learn more. 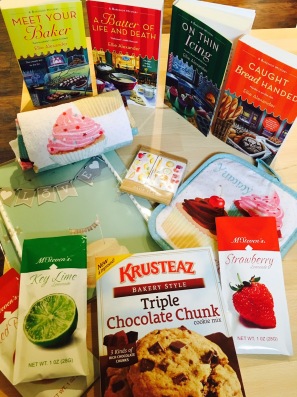 Signed copies of all 4 books in the Bakeshop Mysteries, Cupcake tea towel and pot holder, Love cake topper, Bakeshop page flags, Assortment of gourmet lemonade and Triple Chocolate Chunk cookie mix.
US only.
Ends July 20th
Must be 13 or older to enter and have parental permission if under 18. Void where prohibited by law. No purchase necessary to win.

This event was organized by CBB Book Promotions.