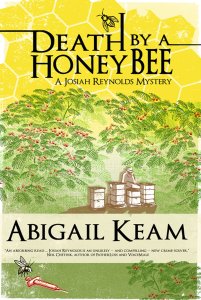 If you’ve been around my blog for a while, you’ll know that I like to read the odd murder mystery – usually of the cozy variety, but not always. Well, this one doesn’t quite fit the category, but take a look at my review to see what I thought about it.

If it’s your first visit here, welcome, please come on in!

Death by A Honey Bee by Abigail Keam
My rating: 4 of 5 stars

I was attracted to this book by the location – Bluegrass, Kentucky. Sweeping countryside, race horses, old and new money; a grand place for a murder mystery series.
Josiah Reynolds – somewhat bizarrely named as she’s a woman – is a bee keeper. She was formerly a professor of art history, married to a professor of architecture who designed their extraordinary home, the Butterfly, which is almost a character in its own right.
Unfortunately for Josiah, said husband left her for a younger woman and promptly died, so now she is a widow, but the ‘other woman’ got most of his assets. Josiah is left with the house and her art collection, and a pile of bills she struggles to pay with the income from her honey production.
That all comes rather unstuck when Josiah discovers a body, head down into one of her hives, and he happens to be someone she recently had a very public row with at the farmers market where she sells her product.
It was fun learning about bee keeping, and the secondary characters all held their own, particularly Matt, the devastatingly handsome gay guy who lives on Josiah’s farm as her assistant and shares her penchant for quoting witty film dialogue.
For an arthritic, asthmatic middle aged woman with a somewhat cranky disposition, Josiah is surprisingly engaging to read about. The writing is smooth and blends into the background nicely; the plot construction is pleasing, with intertwining mysteries and a dollop of well spread information on a number of subjects.
The ending was both a surprise and a slight disappointment, as it was one of those pesky cliff hangers (quite literally, in this case), though I will admit that for once I wasn’t too annoyed. The actual murder is cleared up, but by then other plot lines have taken on lives of their own, and the story is set to continue. I already have the next book loaded up, so I’m away to see what happens next.
In summary, this is a hard one to classify – its neither cozy nor hardcore mystery, but it might appeal to readers of either. Provided you like your heroines somewhat less than conventional, definitely less than physically fit, and pretty sarcastic to boot.

PS – I just finished the second book – Death by Drowning – review on the way soon.

Abigail Keam is an award-winning author who writes the Josiah Reynolds mystery series about a beekeeper turned sleuth. She also writes an ebook epic fantasy series – The Princess Maura Stories of The de Magela Saga.

DEATH BY A HONEYBEE won the 2010 Gold Medal Award for Women’s Lit from Reader’s Favorite and was a Finalist of the USA BOOK NEWS-Best Books of 2011.

DEATH BY DROWNING won the 2011 Gold Medal Award for Best Mystery Sleuth and also was placed on the USA BOOK NEWS-Best Books of 2011 as a Finalist.

Ms. Keam is also an award-winning beekeeper who has won 16 honey awards at the Kentucky State Fair including the Barbara Horn Award which is given to beekeepers who rate a perfect 100 in a honey competition.

She currently lives on the Kentucky River in a metal house with her husband and various critters. She still has honeybees.