New Release – BLADE OF THE DESTROYER by Andy Peloquin – #DarkFantasy

A faceless, nameless assassin. A forgotten past. The Hunter of Voramis–a killer devoid of morals, or something else altogether? (Blade of the Destroyer–dark fantasy with a look at the underside of human nature) 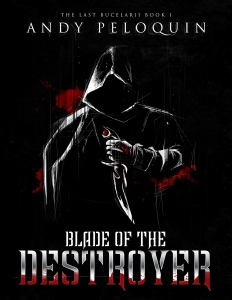 Title: The Last Bucelarii (Book 1): Blade of the Destroyer

The Last Bucelarii (Book 1): Blade of the Destroyer

The Hunter of Voramis is the perfect assassin: ruthless, unrelenting, immortal. Yet he is haunted by lost memories, bonded to a cursed dagger that feeds him power yet denies him peace of mind. Within him rages an unquenchable need for blood and death.

When he accepts a contract to avenge the stolen innocence of a girl, the Hunter becomes the prey. The death of a seemingly random target sends him hurtling toward destruction, yet could his path also lead to the truth of his buried past?

Thanks to Andy for providing a flavour of his book:

Here’s a taste from the book–one of my favorite parts of the entire thing. It gives you a pretty good idea of the world in which the Hunter lives, the types of people he encounters, his reputation, and his attitude toward the world around him.

Courier Balgos slunk through the slums of Beggars Row, gagging at the stench of the litter-strewn streets. He wore the simple robes of a messenger, but even his humble clothing contrasted sharply with the staggering poverty around him.

The smell of refuse, ordure, and death rose from myriad piles of the-gods-knew-what, hanging in a miasma so thick he could almost taste it.

By the gods, if only there was some way to block out this stench.

He placed his feet with care, studying the ground as he walked.

“Shit!” he cursed aloud. Warm wetness filled his boot, causing him to gag.

Thank the Illusionist I didn’t have breakfast, or it might join the rest of the fragrances in this horrible place.

Two days had passed since the Feast of Illusionist’s Night, and Balgos still struggled with the after-effects of too much strong drink. His head had stopped pounding, but his stomach still recoiled at the thought of food.

“Please, sir,” a voice warbled from a nearby pile of rags, “a coin?”

From the heap emerged a scarred, pox-ridden face. The man’s mouth held few teeth, and a wart protruded from his broken nose. The eyes stared at him with a dull, listless expression. A grubby hand reached towards the courier, gnarled fingers covered in a thick crust of grime. Flaking flesh fell from the beggar’s arms and hands.

“Get away from me, filth!” Balgos yelled at the leper, his eyes growing wide in horror. The messenger made the warding sign of the Maiden and hurried away.

I have to get the frozen hell out of here before I catch something!

The messenger muttered oaths under his breath, cursing the Hunter and his need for secrecy. He desperately wanted to flee Beggar’s Row, but he had a task to complete first.

He scanned the street, searching for the sign of The Rusted Dangle. Relief flooded him as he rounded a corner in the street and spotted the inn.

I just have to deliver my message and I can take a very long bath!

The Rusted Dangle stood—barely, he thought—at the end of the lane. It appeared to be a nail away from collapsing. Its roof slanted at a dangerous angle, and far too many hastily constructed support beams held up the building.

Rust had worn away the phallic sign depicting the inn’s name, suspended on a rope so frayed that a light breeze could blow it down. The inn’s front doors hung from hinges older than Voramis itself, and Balgos feared he would rip them out of the wall if he pushed too hard.

The interior of the inn matched its dilapidated exterior. The furniture consisted of tables and chairs cobbled together from scraps of wood that had no right being used for construction.

Behind the bar, stood a balding innkeeper that looked as old as the inn itself. “What can I get you, lad?” the man asked, his tone pleasant.

I must be his first paying customer in years, thought Balgos.

The messenger strode toward the bar, opening his mouth to answer. A raconteur in bright clothing bumped into him, almost knocking him over.

“Watch where you’re going, fuckwit!” Balgos yelled at the man.

The traveling entertainer muttered something in response, and the courier gagged at the man’s putrid breath.

That swill he drinks must be brewed in a latrine, he thought, pushing the man away.

The drunk hardly noticed the insult and the shove, simply stumbling toward an ancient-looking table in a darkened corner of the bar.

Balgos wiped his hands on his tunic in disgust, trying to scrub away the filth from the raconteur’s clothing.

“Room four,” he demanded of the bartender.

The balding innkeeper waved a pudgy hand towards the hall at the opposite end of the tavern. “Right that way, sir. But first, might I offer you something to eat or drink?”

The courier summoned every shred of etiquette he possessed. “Another time, perhaps,” he replied with a forced smile as he turned away from the bar.

A quiet “ahem” sounded behind the courier. He turned back to see the pub landlord wearing an apologetic smile on his face, his hand held out expectantly.

“Two coppers for use of the room, sir,” the bald proprietor said with an oily smile.

Balgos rolled his eyes and fished a pair of copper bits from his purse. He deposited the coins in the innkeeper’s hand with a scowl, but the man appeared not to notice. The coins disappeared into a purse beneath his clothing, and he returned to his futile task of wiping the filthy bar with an even filthier cloth.

The floorboards of the dark hallway creaked beneath Balgos’ feet, and the scent of year-old unwashed sheets filled his nose.

No wonder the Hunter likes this place, he thought. No one in his right mind would ever stay the night here.

The door stood unlocked, and he hesitantly pushed it open. The room beyond was dark, the window covered with thick oilcloth to block out the light.

Balgos closed the door and waited in silence, trying not to inhale the foul scents of the darkened room.

“I hear you’re looking for me.” The deep voice echoed in the stillness.

“Keeper’s icy balls!” Balgos cursed, startled. The courier jerked back, instinctively moving away from the threatening figure materializing before him.

I didn’t even see him enter the room!

“You came for a reason, I assume,” the Hunter cut him off.

Balgos snapped his mouth shut, fighting to calm his racing heart. The Hunter towered over him, his silhouette framed against the dim light filtering through the covered window. Balgos couldn’t see the assassin’s face, nor did he want to.

“Sir Hunter,” he said, struggling to keep his voice calm, “I come with an unusual request.”

The Hunter could have been made of stone for all the response he gave. The silence unnerved the courier and set his hands trembling.

“Right,” Balgos stammered, “er…um…well…right.” He drew in a deep breath before continuing. “My…er…master requests that you visit him in his home. He—”

“I don’t make house calls,” the harsh voice of the Hunter interrupted.

“I know, sir, but I believe you will want to make an exception. My master is—”

“I don’t care who your master is. If he wants to meet me, he will do so on my terms. The door is behind you.”

“My master is unable to move around the city, or else he would meet with you in person.”

“But,” Balgos burst out in desperation, “my master will pay your normal fee just to hear what he has to say, and double if you agree to take the contract.”

Has he gone? Am I talking to an empty room?

“I am considering your master’s offer,” the Hunter intoned, his voice thoughtful.

Balgos’ heart pounded in his chest, and sweat trickled down his back as he waited for the assassin’s answer.

“Very well,” came the voice from the darkness. “The payment?”

Balgos removed a heavy purse from within his robes, extending it towards the Hunter. The Hunter roughly plucked it from his hands, and the courier heard coins clinking in the darkness.

“Tell your master I will call upon him tonight,” came the rough voice of the Hunter.

“Thank you!” Balgos gasped in relief. “My master will be pleased to hear it.”

“Where would your master like me to meet him?”

“At the Villa Camoralia, in the—”

“I know the place,” the harsh voice interrupted.

“Excellent! I will pass your message along to him, then. He will be pleased to hear it.”

Without a backward glance, Balgos fled.

He rushed through the dim taproom and pushed through the front doors without even a nod to the bartender. In his haste, he failed to notice the fact that the inebriated raconteur in his outrageous bright clothing no longer sat at his table.

The foul streets of Beggar’s Row rushed by, yet still he ran, heedless of the voices crying out for coin, food, or drink. Only when he reached the Merchant’s Quarter did he slow.

“Fucking Hunter,” he cursed, turning his steps toward Upper Voramis and the Villa Camoralia.

“The fantasy world has a compelling new antihero…the Hunter will terrify and captivate you.” – Eve A Floriste, author of Fresh Cut

“From the first words on the page this fantasy holds the reader spellbound even after the book is finished…his character is very well-defined even if his past is a mystery. Root for an assassin? Oh, yes, one must!” — Carol Conley, for InDTale Magazine

Andy Peloquin: Lover of All Things Dark and Mysterious

Andy Peloquin–a third culture kid to the core–has loved to read since before he could remember. Sherlock Holmes, the Phantom of the Opera, and Father Brown are just a few of the books that ensnared his imagination as a child.

When he discovered science fiction and fantasy through the pages of writers like Edgar Rice Burroughs, J.R.R Tolkien, and Orson Scott Card, he was immediately hooked and hasn’t looked back since.

Andy’s first attempt at writing produced In the Days: A Tale of the Forgotten Continent. He has learned from the mistakes he made and used the experience to produce Blade of the Destroyer, a book of which he is very proud.

Reading—and now writing—is his favorite escape, and it provides him an outlet for his innate creativity. He is an artist; words are his palette.

His website (http://www.andypeloquin.com) is a second home for him, a place where he can post his thoughts and feelings–along with reviews of books he finds laying around the internet.

He can also be found on his social media pages, such as: