Secure in his position as the Prince-warlock’s son, seventeen-year-old Basil is content with his solitary life of study and magic. He has a comfortable set of rooms in his father’s tower, he has his books and scrolls, and he is perfectly happy. Until the Warlockry Council summons him, and their demands sets his whole, safe existence tottering. Scared and unsure, he decides to run, and takes the first ship out of town. On board he meets Yarwan, the handsome midshipman, who awakens feelings he never knew existed. 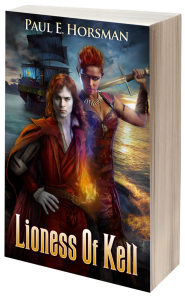 Maud of the M’Brannoe, at eighteen already a mighty warrioress, is about to graduate as a Lioness, a special duty officer answering to the Kell Queen and no one else. The Prince-warlock asks her to fetch a certain boy from a pirate town, who could be double for his son. On their way back, someone sabotages their airship and the two find themselves marooned in an ill-reputed forest. Together, the young lioness and Jurgis the lookalike battle their way to the coast and a ship home, while finding solace in each other’s arms.

A spirited fantasy story of high adventure and romantic love in a world where both magic and early modern technology flourish.

There is much to admire in the themes this book tackles: role reversals, homosexuality and prejudice, mixed race relationships, beauty and vanity – and it does a good job with them. The story is also truly epic in scope, and original in its world building, with steampunk elements woven into traditional fantasy, mixed with a pinch of fairy tale.
Having said all of that, for me, it didn’t quite hit the mark. Undoubtedly there will be plenty of people who fall in love with the diverse characters and tons of action, so don’t let me put you off. There were many small niggling things that didn’t work for me, but the core of my problem was a lack of emotional resonance with any of the main cast. There were bits I liked about all of them, and there is no question they developed through the story, and yet I found their portrayal short on emotional depth. That made the reading experience too superficial for me to fall in love with the book, despite so many good things about it.
My issues began with the title – the Lioness is only one of the characters. Although the book opens with her as apparently the main character, after a few chapters it transforms into an ensemble cast, with a viewpoint that shifts between characters, and sometimes becomes authorial. The many unwieldy formal titles in the opening chapter also slowed things down.
On the plus side, while the opening plot seems pretty predictable, it swiftly moves to frequent unexpected turns after the opening section. On the minus, much of the time the characters are reacting to events rather than being proactive, and for my taste there are rather too many plot coincidences. The challenges faced by our heroes tended to be rather easily overcome; never succeeding in convincing me they were really in danger.
There were a few small editing issues, but not enough to annoy, and vast amounts of the writing was grand. I’m guessing that a regular YA reader would probably not be bothered by any of the things that niggled me, so I suggest that if this sounds your sort of read, you take a punt and make up your own mind.
I received this book in return for an unbiased review – all thoughts are my own.

Paul E. Horsman (1952) is a Dutch and International Fantasy Author. Born in the sleepy garden village of Bussum, The Netherlands, he now lives in Roosendaal, a town on the Dutch-Belgian border.
He has been a soldier, a salesman, a scoutmaster and from 1995 till his school closed in 2012 a teacher of Dutch as a Second Language and Integration to refugees from all over the globe.
He is a full-time writer of light fantasy adventures for Y.A. and older. His books are both published in the Netherlands, and internationally.

There is a giveaway for this tour for a $25 Amazon Giftcard, courtesy of the author. Ends 8/21.