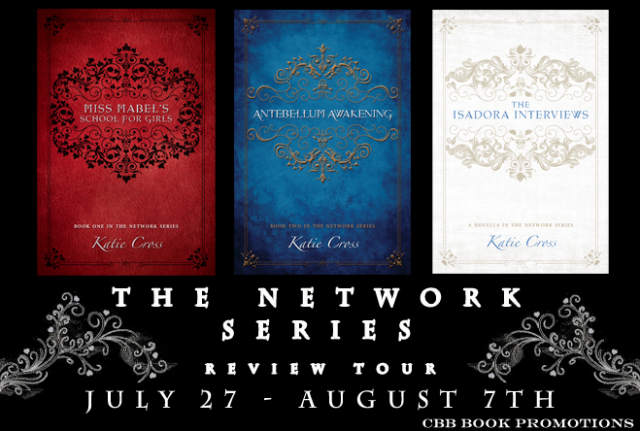 The Network Series is a YA fantasy

About Miss Mabel’s School for Girls:
Never Underestimate the Power of a Determined Witch.
Letum Wood is a forest of fog and deadfall, home to the quietly famous Miss Mabel’s School for Girls, a place where young witches learn the art of magic.
Sixteen-year-old Bianca Monroe has inherited a deadly curse. Determined to break free before it kills her, she enrolls in the respected school to confront the cunning witch who cast the curse: Miss Mabel.
Bianca finds herself faced with dark magic she didn’t expect, with lessons more dangerous than she could have ever imagined. Will Bianca have the courage to save herself from the curse, or will Miss Mabel’s sinister plan be too powerful?
Miss Mabel’s School for Girls is the first novel in The Network Series, an exciting new fantasy collection. A gripping tale about the struggle to survive, it will take you to a new place and time, one you’ll never want to leave.

Think Harry Potter meets The Hunger Games.
Or at least, that’s how it starts out.
Sixteen-year-old Bianca Munroe is determined to enrol in the famed Miss Mabel’s School for Girls, where the best witches in the area receive their training, and go on to fulfil important roles in the society of the Networks (regions, a bit like the Districts in Hunger Games).
Sounds simple so far, but Bianca is hiding an ulterior motive which she keeps hidden even from the reader for quite some time, although there clearly IS a secret, we are just not privy to its details. Or to the reason why Bianca must conceal the identity of her father at all costs.
Making it through a tricky interview, Bianca is enrolled in the school, but not content with that achievement, she then strives to become Miss Mabel’s personal assistant by entering a dangerous competition, pitted against witches older and more educated than she is.
Or are they?
I won’t go further as that would spoil the plot.
I was captured from the word go by the secrets and suspense of the tale, along with Bianca’s personality, which varies from strong and resourceful, to self-doubting and desperate as events unfold. The friends she makes at the school are interesting and unique characters, and clearly have roles to fulfil in the rest of the series, which I will most definitely be reading. This book sets up a far wider story to come, taking in politics, betrayal, and war across the Networks of Antebellum
I was also particularly taken with Katie Cross’s writing style, which never used a boring word or description, and yet succeeded in not descending into purple or flowery prose. It is also error free and well-presented – such a relief after some of the books I’ve (tried to) read lately.
Highly recommended provided teenage heroines are your type of read.

Never underestimate the power of a volatile witch.

Still reeling in the wake of her mother’s death, sixteen-year-old Bianca Monroe is forced to move to Chatham Castle. Not even the sudden appearance of ancient dragons in haunted Letum Wood nor her two best friends can distract her from the strength of her deep, dark rage. Her grief puts her magical powers into chaos, endangering any witch around her. She has six months left to destroy the curse that will kill her and fulfill her contract with the most cunning enemy of all: her former teacher Miss Mabel. Bianca must make a choice: learn to control her restless powers, or let the powers control her.

Antebellum Awakening is the second book in the thrilling new fantasy collection The Network Series. It’s a haunting tale about tragedy, loss, and the power of moving on.

ABOUT THE ISADORA INTERVIEWS:

Isadora is a quiet, old witch living alone in the fog-strewn forest of Letum Wood. Her magical power is great, but her foresight is even greater.

As a Watcher, Isadora has the ability to see into the heart of every witch she meets, a talent that makes her the perfect guardian of the prestigious Miss Mabel’s School for Girls.

Any witch that wants to enter the school must first pass an interview with Isadora. No secret insecurity or sinister motivation can be hidden from a Watcher, as four teenage girls will soon find out.

Katie Cross grew up in the mountains of Idaho, where she still loves to play when she gets the chance.If she’s not writing, you can find her traveling, working as a pediatric nurse, trail running with her husband and two dogs, or curled up with a book and a cup of chai.

Please check out the tour page – http://www.cbbbookpromotions.com/tour-sign-up-network-series-by-katie-cross-july-27-august-7/ – for schedule and more information.