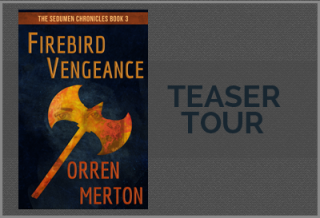 I’m excited to present the teaser tour for Firebird Vengeance by Orren Merton. This is the third book in the Sedumem Chronicles, a young adult urban fantasy series. Today we have a teaser for you to give you a taste of the authors style. This is not included in the book, but gives you a taste of it.

Walters: Thank you for assembling on such short notice. I realize how extraordinary it is to be called from your beats, but this is pretty extraordinary. I’d like to start by taking a moment to lower our heads for Officers Herrera and Nguyen, killed in the line of duty.

Officer Julie Conklin: Sir, what are those things?

Walters: If you’ve seen Lady Firebird’s video, you know as much as I do. She’s calling them “Possessed.” That’s important, people—remember, it’s not grandma any more, or your buddy from down the street. I know how much it hurts to think of them as walking lasers in a meat wrapper, but that’s basically what they are at this point.

Officer Frank Lee: Why here? I mean, why Detroit, not that I want them to be blowing up the 7th District or anything.

Walters: We’re not sure. She said something about those things trying to destroy the purest among us. Maybe there’s some really pure nuns or rabbis or imams in our district. I don’t know. But I do know that they’re here, and we have to do what we can to protect our citizens.

Officer Jennifer Maiz: But they can shoot through anything—cars, body armor, buildings, you name it. What are we supposed to do?

Walters: I’m getting to that Maiz. I just got off the phone with Sergeant Hector Godinez in California. He’s the detective who’s got Lady Firebird on speed dial. He says that any minute now, we can expect a couple of her…I dunno what the hell they are. I think he called them “Marzipan”—

Walters: Thanks, Dunn. We’re getting a couple of those in a minute or two. They’re bringing specially treated shields, swords, and bows and arrows they say can protect against the blasts and hurt the possessing spirits inside. I don’t suppose we have any sword and bow experts in our precinct, do we?

Officer Brent Jeffers: I go bow hunting with my cousins up north sometimes, does that count? Walters: Right now it does, thanks Jeffers. You and any others who have training, you’ll try to take out those Possessed things. The rest of us will try and clear out as many citizens as we can, and if you’ve got a clear shot, go for their eyes—that won’t kill them, but it will keep ‘em from firing at us. Then we can take ‘em out with swords.

Walters: Well, I’m not an expert, but I think we need to stick them with the pointy end.

Intercom: Sir…I…we…there’s two large beings at the counter right now. One looks like a gorilla with an alligator head, and the other some kind of bear with a tiger head. They’ve got huge bags over their shoulders, that firebird lady’s symbol on their shirts, and they’re…they’re talking, sir. They’re asking to see you…What do we do?

Walters: Okay officers, we’re up. Everyone grab a shield, and lets get these Possessed. Keep safe, and let’s hope that Lady Firebird knows what she’s talking about. 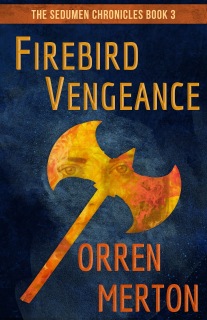 When eighteen-year old half-demon Alexandra Gold uses her firebird spirit to save the soul of a murdered girl, it brings her to the attention of the most powerful beings in her parallel universe.At first, she believes this is a blessing. When she discovers that she has been the unwitting pawn of an ancient vengeance that intends to destroy every living human and demon in both universes, she realizes that she’s been cursed.

This ancient vengeance has the power to re-animate the dead and use them to murder the living—and for each of the thirty-six most righteous human beings it murders, the more powerful it becomes.

Alex is determined to protect the thirty-six and save both worlds, but she cannot defeat Vengeance alone. All she has is her demon blade, her spirit fire, and her wits—to prevail, she must convince those humans and demons who are terrified and blame her for this catastrophe to help her.

Goodreads | Amazon About the Author:

his own amusement. In high school, he listened to a lot of dark and moody rock, which inspired him to pick up guitar and start playing up and down California in a few bands, culminating in his Industrial rock group Ember After releasing their debut album, Grasping At Straws, and subsequently The Misery EP. During that time, magazines, developers, and corporations began to pay him to write and edit music software related articles, manuals, and books. Since then he has written the urban fantasy novel The Deviant and the science fiction novel Skye Entity before working on his current series of YA novels. He lives in Southern California with his family, pets, collection of sci-fi/fantasy memorabilia, and curiously large stuffed animal collection.

This event was organized by CBB Book Promotions.