SYNOPSIS: “There was a flash of light, the ground quaked, and suddenly a large silhouetted shape lifted itself from swirling white flames.”

Shawna’s ordinary life is forever changed when monstrous creatures come scratching at her door, and a black unicorn mysteriously comes to her aid. She then finds herself at the mercy of a sassy old witch, a quirky fairy who’s allergic to her own fairy dust, and a world of magic and nightmares. A world, she discovers, that is not only her own, but is unraveling from an ancient curse. The truth of its origins, and of the shattered sapphires, will take Shawna and her companions on a fantastical adventure through the hidden secrets of the shielded realms.

~ When there is darkness in our lives, and the path is not always clear, all we need to do is believe. ~ 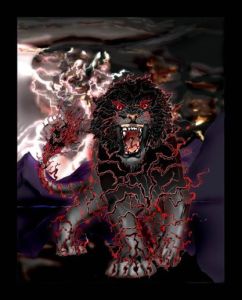 Antares – one of the good guys in Sapphire

Shawna appears to be a normal sixteen year old schoolgirl – until the monsters come for her. Escaping with the help of a unicorn trinket that suddenly transforms into the real thing, she finds herself in a truly weird place, meeting truly weird creatures.

When she realises that she’s not been committed to the funny farm, and that it’s all horribly real – including the red-eyed beasts that are after her – she sets out on a quest that apparently prophecy has ordained for her. Or has it?

Griffith has a huge imagination, and the visually descriptive powers to place the reader right there inside the action along with her characters. Those characters are varied and truly individual, with distinctive voices and traits, like the fairy who can’t help herself from turning things pink.

There is some wonderful use of descriptive language, though at times it teeters on being over-done, with a few too many adjectives. The story rattles along at a great pace, although I did have certain issues with the plot construction. Everything was explained in the end, but long before I got there, I struggled with the reasons behind this ‘quest’ to find the various realms. They found each in turn, entered it, left it, and carried on. What was the point? And I couldn’t see why Shawna wasn’t asking that question. Yes, the explanation was there at the end, but it nagged at me all the way through, which I found distracting.

On an editorial level, although this tale is told primarily from Shawna’s viewpoint, there are a number of ‘head hopping’ leaps into the viewpoints of minor characters, and several into omniscient, when we are told what Shawna ‘did not see’.

There are also quite a few instances when ‘they’, ‘them’, ‘him’, ‘her’, ‘he’ and ‘she’ are unqualified, so it’s not clear who is being referred to.

Overall, whilst there was very much I liked, I found it a slightly uneasy mix of cutesy fairy-tale characters with some truly gruesome events. The final sacrifice was heart-rending, and the whole thing wrapped up quite neatly, I just feel it needed another editing pass to transform it into the spell-binding tale it could become.

For me, three and a half stars.

Elayne Griffith grew up writing, drawing, climbing trees, and riding unicorns…er, horses as a young girl. After graduating with a Bachelor of Fine Arts, and many years of job-bouncing, she suddenly had an epiphany: life is short, do what you love to do. She quit her job in the city and moved back to nature. Many bags of rice and beans later, she has written her first novel. She currently lives in the mountains, happy as a caffeinated squirrel, while continuing to pursue her writing and artistic career. “Follow your passion, for it is your greatest love.”

And everywhere EBooks are sold, Worldwide