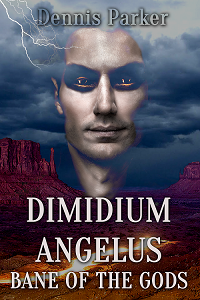 As Lucifer fell from Heaven, he was not alone. The Greek and Norse gods, as they would later be known, were originally angels allied with Lucifer in the rebellion against God. Now, their children have found the truth and, under God’s command, have bound their parents. The archangels of Hell have made it their mission to release the gods and return them to their former glory. The Dimidium Angelus, as the children are known, fight the forces of evil through thousands of years in order to keep their parents bound. The children find they may be in over their heads, however, as Azazel, the most powerful archangel they have faced in their immortal lives, joins the fight. Only the fulfillment of an ancient prophecy will bring them victory.

Dennis J. Parker was born in 1970 and is a proud resident of Oklahoma. Graduating from Oklahoma State University in 1996, Dennis chose a career in law enforcement and has served as a police officer for 18 years. Dennis is married and is the father of two boys. His interests are widely varied, from sports (college and pro), gaming, writing, music, to anything else that crosses his path. Dimidium Angelus is his first effort as an author.

And everywhere EBooks are sold, Worldwide

How would you like a free copy of this book to review? Leave me a comment below with an email address and which format you read (kindle, mobi or PDF) and who knows? You might be the lucky one…

← How to write a sentence – or then again, perhaps not! #humour #writing
Teaser Tour & #giveaway – BURDIN OF CHOICE by Alexander Nader #UrbanFantasy →