As this was my first World SF Convention, I wanted to cram in as much as possible, and I took that to mean going to as many items of the near 1000 events on the programme as possible.

Of course, by the third day I was panelled out, and started to miss a few in favour of wandering around the art show, or the dealers room, or just having a coffee with friends. 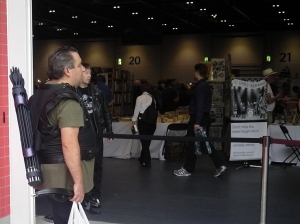 But I arrived with huge enthusiasm on Day 1, Thursday, for a 10am panel, giving myself a clear (ha ha) half an hour to get through Registration.

I am so glad I got there that early. In the end, it took me 40 minutes, but friends who arrived later stood in the queue for 2 and a half hours!

By the time I got upstairs (floor 3) and located the little room where they were holding the inaugural Tolkein Society presentation – ‘Hobbits! Rabbits! a discussion on how different age groups experience The Hobbit and LOTR, and are the rabbits welcome, or were they a mistake?’ there was only standing (or sitting on the floor) room. I squidged in at the back and eventually spied an empty seat right in the front row. When I got down there (everyone watching, of course) I realised the front row was reserved for mobility issues – all except the one nearest the wall, so down I sat. Phew!

(BTW, the general consensus was that the rabbits were fine, as Radegast had to undertake a journey within a specific time frame that would have been impossible by normal means. There was, however, a suggestion that hares might have been better, as they are by nature a magical animal.)

This seating problem became one of the over-riding issues of the Con, leading me to always leave a panel ten minutes early to ensure a seat on the next, because after the first day, the ‘elf ‘n’ safety bods refused to allow anyone in the room who did not have a chair (I did notice one or two canny customers bring their own folding chairs – good for them!) For panels with a popular author on them, missing the previous discussion altogether to get into line was also necessary. I mentioned this in my inaugural post, so I won’t belabour the point, but it wasn’t an aspect of LonCon3 that I enjoyed.

I guess this would be where I got it a bit wrong. Although once, in the dim and distant past, I attended a fan convention (Who’s Seven – for fans of Dr Who and Blake’s Seven), in more recent years I’ve only been to a writer’s convention and Fantasy Con 13, both of which provided me with huge amounts of information that has enhanced my writing, publishing and marketing skills.

It would be fair to say that I expected much the same from the panels at LonCon3, but that wasn’t what I got. I did learn a few things, but many of the panels were just writers talking in such general terms about the title topics that they really didn’t come out with anything I wouldn’t have expected to discuss with my own writer friends over a coffee (or beer).

So enjoyment came down to how entertaining the panellists were, and I already listed those I found best in my first post and I thought I could share some of the amusement of listening to George R.R. Martin, author of the Game of Thrones series, for whom I made certain to bag a seat early!

I would have loved to have recorded the whole thing, and of course I missed the funniest lines, but here is a little snippet of him responding to the comment that it was ‘ironic how he came out of working on TV to write a book that couldn’t be filmed’.

Other comments I noted were his advice that a writer should ‘borrow, steal and pillage history’, and that in his opinion, any wedding with less than 3 deaths was boring!

When asked for his favourite place in London, he answered (no surprises here) The Tower of London, with his second being Hadrian’s Wall – the influence for The Wall in his books.

It was mentioned that he has been dubbed ‘the American Tolkein’, and while he was demure about that idea, he did concede that he shared his writing process with that of Tolkein, using an analogy that was new to me (but probably not to many of you) – that of the GARDENER versus the ARCHITECT – where the gardener plants seeds and waits to see what grows, while the architect designs the structure fully before starting to build. Both Martin and Tolkein come into the ‘gardener’ category, which appeals, as so do I.

I can’t quote any of Connie Willis’s many hilarious comments, and I wish now that I’d noted those down too, as she was worthy of a panel all to herself, and she and Martin sparked off each other to great effect.

I followed this up with another Tolkein Society presentation, about how Tolkein’s work continues to defy publishing conventions, and then a panel discussion on ‘Queerbaiting’ – on how same-sex relationships in TV shows have proven not to be a turn off to the general population (think True Blood and Game of Thrones), and yet many shows still treat queer (their description, not mine) characters as oddities. Frankly I didn’t know all the shows they were discussing, and spent much of the time studying the moderator’s amazing hair and trying to decide if she’d modelled it on a porcupine. 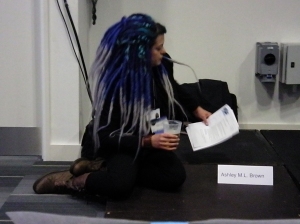 I loved it, but I don’t think it would work for me – too tricky to cram under a riding hat. 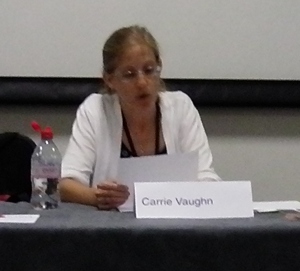 I finished the evening attending a reading by Carrie Vaughan, author of the ‘Kitty’ urban fantasy series about a werewolf with her own radio show, The Midnight Hour. I’ve loved this series and now it’s drawing to a close, she read the opening of a spin off series about a recurring character in the Kitty books, which promises to be great too.

That concluded my first day – a whirlwind of varied panels, most of which were great, and I went back to my digs (I borrowed a friend’s spare room as she only lives 15 miles from London’s Docklands – initially quite a scary event, as I arrived to find that no one had been in there for over 4 years!!!), and crashed out.