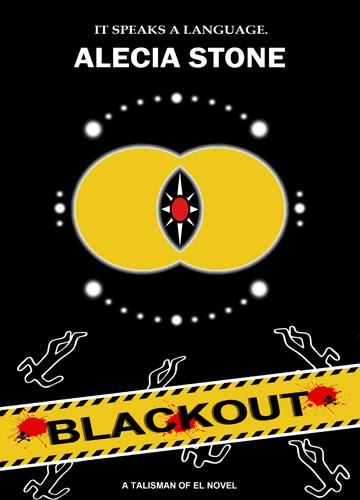 Blackout (T.O.E. Trilogy, Book 2)
by Alecia Stone
Release Date: March 19, 2014
Centrinian Publishing Ltd
Summary from Goodreads:
What was shall no longer be. Was was not shall now become.
Despite having the protection of the talisman and the Legion, a reforming force of warrior angels and elementals, guarding his every move, things are not looking good for Charlie Blake. Tasked with the responsibility of saving mankind, finding the four diamonds to restore the talisman is all he can think of, but when his prophetic visions start to invade his reality and he suddenly can’t distinguish the dream world from the real world, the pending extinction of mankind becomes the least of his problems. Everyone assumes Charlie’s dormant powers are activating, until he starts showing symptoms of a deadly disease.
With his nemesis, Gaddis, threatening the lives of his loved ones, he faces a race against time to locate Raphael’s Stone, the air diamond, before an imminent pandemic destroys civilization. As he ventures into dangerous lands once again, he unearths shocking revelations about his past life that forces him to question his allegiance. With no one to turn to for answers, he can’t help but wonder if his purpose is truly to save mankind.
Excerpt from Blackout:
Charlie’s eyes shifted back and forth between Derkein and the knife. Derkein had a look in his eyes he didn’t recognise. This wasn’t the man he had moved in with. He wasn’t the man who was soon to become his adoptive father. This was an impostor.
‘My father always said everything happened for a reason,’ Derkein said, ‘but he never met you. What good is immortality if I’m stuck in one place?’ He stopped and dropped his arm by his side, the knife slipping out of his grasp and landing with a clunking noise on the marble floor.
Charlie stopped, leaving a few inches between him and Derkein, who was standing with a guarded stance. Charlie couldn’t help but wonder who was more afraid of whom.
‘You’ve left me to rot in this god forsaken world for the rest of my life, so forgive me if I seem a tad ungrateful,’ Derkein went on in a flat tone. His blank expression left no room for interpretation. ‘If I have to rot in hell, I don’t see why I should have to suffer alone.’
Charlie didn’t see it coming. Derkein lunged at him, grabbed him by the arms, and thrust him backwards. Charlie waited for the collision of his back with the conservatory door, but the impact didn’t occur. Instead, he found himself falling and landing hard on his back in darkness. The only source of light came from the kitchen ahead of him where Derkein was standing.
‘Why do you look so surprised?’ Derkein asked. ‘What did you expect was going to happen when you resurrected me, or did I not deserve the common courtesy of a conscious thought? I’m not like you. I’m not like them. Tell me, Charlie. What am I, exactly?’
Charlie rose up into a sitting position. He didn’t have the answers Derkein was seeking. ‘I’m sorry.’ The words barely escaped his mouth.
‘Yeah. Me too.’ In the blink of an eye, Derkein and the kitchen vanished, leaving Charlie in complete darkness. He sat in the empty silence, waiting. It wasn’t until he heard his rapid breathing that he realised panic had overcome him. Charlie scampered to his feet and charged ahead of him, ramming into the hard, rough texture of a brick wall.
‘Derkein!’ he yelled, pounding the wall with his fists. ‘Derkein, please –’
‘Sol.’
Charlie felt a crawling sensation move down his spine as a shrill voice echoed around him. With his palms braced against the wall, he remained still as the voice slowly faded. He held his breath as silence invaded the space once again. When the voice didn’t return, he made a move to the right, running his hand over the wall as he searched for the door.
Within seconds, he felt a tingle of cold air on the back of his neck that made him jump, and he released his breath. He spun around, shifting his head left and right, but his eyes couldn’t penetrate the darkness that surrounded him.
He reached up towards his neck and froze. The rhythm of his heart accelerated as he moved his hand over his chest in search of the familiar touch of the two silver rings he had become so accustomed to over the past five years, but the chain wasn’t around his neck. Although he couldn’t see anything, he suddenly felt as though the darkness was closing in on him, compressing his lungs as if attempting to stifle him.
A spotlight appeared a few feet in front of him, and his heart stopped. He gulped down the lump forming in his throat as he stared at the figure submerged in the light, dangling about two feet off the ground.

About the author Alecia Stone
Alecia Stone is a full-time writer who spends most of her days with her head in a book. She loves anything and everything paranormal – the stranger the better. Her fascination with all things supernatural sparked her obsession with books, particularly young adult fantasy fiction, which she has never grown out of. She graduated with a BA in Film & TV and has worked in television for a short period of time before branching out into storytelling.
When she’s not writing, she enjoys watching movies and travelling. Blackout is the sequel to the Amazon bestselling YA fantasy novel Talisman Of El. She currently lives in the UK with her family.
Author Links:
Website ¦ Facebook ¦ Twitter ¦ Pinterest ¦ Goodreads
Cover Reveal Organised by:

Blackout Cover Reveal Giveaway
Ends March 31st.
International. Open to anyone who can receive gifted ebooks from amazon.com and gift cards from either amazon.com or amazon.co.uk. Alternatively, gift card winners may opt for Paypal cash ($10) or a book of choice from The Book Depository ($10).
a Rafflecopter giveaway