Wow, when I began this I didn’t realise it was going to turn into an epic, but as the holiday was – epic, that is – I guess I should not be surprised.

Where were we? Oh yes, coming to the last few days of the Red Carpet Tour, next up was an incredible landscape in Alexandra, Central Otago,  where quite a few scenes were filmed, but was simply amazing just for its stark beauty.

For this portion of the trip we had to change to a smaller bus, as a standard sized coach couldn’t make it across this 1880’s constructed bridge 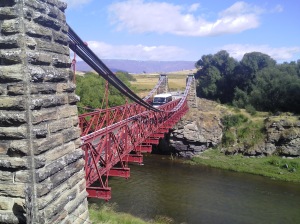 Beyond is gold mining country. Just like other areas that were once mined and panned for gold, this is one of the roughest and poorest areas of the country, so arid they get barely enough rain to grow grass – and you need to avoid the razor grass, believe me it lives up to its name – and we made a brief stop at what passes for a ‘hotel’ out there.

But the lady who owns the thousands of acres around that area (where backpackers still come to try their hand at panning for gold, hence the ‘hotel’) now has a new business – LOTR tourists!

This area crops up in several parts of the films, The Hobbit included. 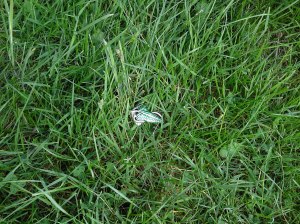 The leaf brooch canyon where ‘dwarves are dangerous over short distances’.

LOTR aside, do you see the turtle in this rock formation?

Picture this with the existing buildings covered in thatch, and some extras added, all burning, and you have the Rohan village from The Two Towers

And where Aragorn, Legolas and Gimli were surrounded by the Rohirrim

Then it was on to the last hotel destination of the tour in Queenstown, and time to book our own personal choices of extra activities for the last day. That leaves one day of film sites, including: 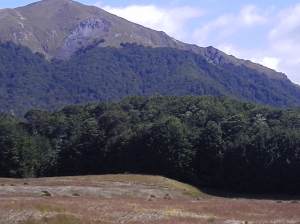 The site of the orc funeral pyre, after Merry and Pippin had escaped into the forest

And where Gandalf first summoned Shadowfax

Moving on, we ventured onto this very bouncy suspension bridge over a flood swollen river, which feed the Lower Mavora Lake 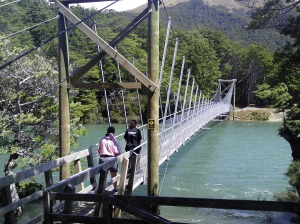 for a great photo opportunity

Picture the river Anduin, with the fellowship paddling towards you…

And the site for the finale of the Fellowship of the Ring, where Sam almost drowned, following Frodo into the lake

The beach where Frodo launched his boat, somewhat less visible at this time due to flooding

View from the beach

The tree behind which Frodo hid before leaving the others 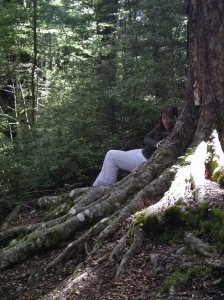 And the Uruk-hai ran full tilt down this slope brandishing their weapons – how they managed to say on their feet,  have no idea! 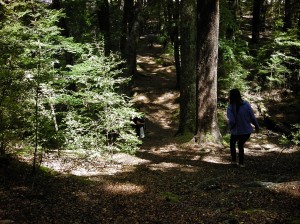 Finally it was time for packed lunches at the trusty bus

before getting stuck in the local version of a traffic jam

One last day of the tour left to cover, then onward, to ‘normal’ touristy sightseeing…