Everville: The Rise of Mallory – latest in Roy Huff’s excellent YA series is out! 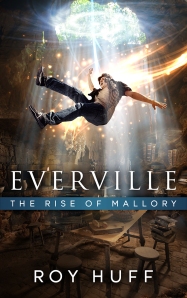 The latest instalment in Roy Huff’s exciting Everville series is now live on Amazon and you can snap up a copy for just $0.99 from now until 2nd February.

As the epic journey continues, a victorious Owen Sage stands undefeated against his enemies. His last battle in Everville gave rise to a new insidious evil, Mallory; whose determination to defeat him opens an unexplored Pandora’s box. Owen’s search for truth will unveil the mystery and surprising insights surrounding himself and his friends at Easton Falls University. New creatures will be uncovered and the true value of friendship will be tested, as Owen embarks on yet another battle in Everville.

Here is an informative review of the 3 books so far:

The First Pillar, book 1 of the Everville series, introduces us to Owen Sage, an ordinary college student whose dreams take him to literally another world.  The adventure takes him and his college friends into the land of Everville where their magical adventure begins. But soon we find out there is something dark and evil out to destroy both the earthly world and Everville. The City of Worms, book 2 of the series, takes a darker turn, as Owen learns more about the evilness that is trying to take over Earth and the land of Everville. Now with help from his new allies, he has to learn about how to overcome the evil.  The action picks up when time is running out to save both worlds.

In The Rise of Mallory, the newest book in the Everville series, the epic journey continues with another battle to save Everville and Earth.  Truths are revealed about Owen and his friends while more interesting creatures are introduced and the lines between good and evil are blurred.  The battle escalates into a breathless climax leaving just enough for readers to anticipate more for future books in the series.
What I enjoyed is Huff’s ability to seamlessly tie in the earthly world and then throw the reader into the fantasy world where mystical and magical creatures live. When I was reading the Everville series, it reminded me vaguely of A Wrinkle in Time by Madeleine L’Engle with young adventurers on a crusade to an unknown magical place.
Young readers, or anyone who likes fantasy adventures, will be entertained with this exciting series. Many questions from the previous books will be answered and fans of the Everville series will be pleased with the highly anticipated The Rise of Mallory.

What others are saying about it:

“This book is ideal for all fantasy lovers and will not disappoint. ”
“The battle escalates into a breathless climax leaving just enough for readers to anticipate more for future books in the series. ”
“I was worried that I would be missing huge plot lines beginning with book #3 the Rise of Mallory but I was wrong. Everville 3: The Rise of Mallory reads like a separate novel with small references to the past but nothing that prevents the reader from fully grasping the storyline.”

And if you are late to the party, you can catch up with the previous instalments while they are on special offer:

Roy Huff is the author of Amazon’s #1 international bestselling epic fantasy novel, Everville: The First Pillar. He is a man of many interests including science, traveling, movies, the outdoors, and of course writing teen and young adult fantasy fiction. He holds five degrees in four separate disciplines including liberal arts, history, secondary science education, and geoscience. Roy Huff’s background includes work in art, history, education, business, real-estate, economics, geoscience, and satellite meteorology. He was born on the East Coast but has spent more than half his life in Hawaii, where he currently resides and writes his epic fantasy sagas.

What are you waiting for?