What exactly is a piebald? – horse tips for writers

Do you remember the film, NATIONAL VELVET?

Do you also remember that the horse in that film was called, ‘THE PIE’?

Have you ever wondered why such an odd name for a horse?

I guess the film makers just couldn’t find the appropriately coloured horse for the part, so they went with a SOLID COLOURED horse, instead of the PIEBALD colour described in the book.

So what exactly is a piebald?

Very simple – a horse that has a coat colour of BLACK AND WHITE patches.

The guy in the foreground is PIEBALD – nothing but black and white whereas the fella behind is actually a TRICOLOUR – brown, black and white (more on him in another post).

Piebalds may have a lot of colour with very little white 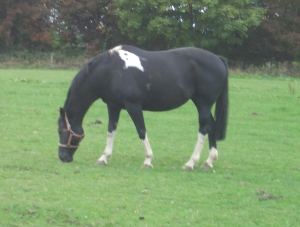 or a lot of white and less colour

Whatever the proportions, the defining fact is that they have only the two colours, black and white, in their coats.

They come under the umbrella classification of COLOURED HORSES, and I’ll cover the other varieties in another post.

Have you seen any horses with colours you can’t describe?  Let me know, and I’ll give you the correct term for it.